ARC Review: Like a Lover (Housemates 2) by Jay Northcote 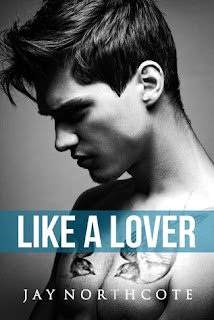 
Josh has a plan: get through uni with a good degree and no debt. Focused on his goals, he pays his way by working as an escort. He enjoys the no-strings sex because he doesn’t have time for a relationship. Falling in love definitely isn’t part of the deal—especially not with a client.

When Rupert meets Josh in a bar, he’s smitten on sight. He’s never paid for sex, but when Josh propositions him, he can’t resist. He should’ve known one night would never be enough. Luckily for him he has an inheritance to fund his addiction to Josh, because his job in IT support wouldn’t cover the cost.

With each encounter the lines get blurred, creating something that feels more like a relationship than a business transaction. But they come from different worlds, and to go from client-and-escort to lovers seems impossible. If they want a future together, Josh and Rupert have a lot to overcome.

I have a Pavlovian response to Jay Northcote's books. If she writes it, I will read it. I saw this cover and read the name Josh in the blurb, and I was all, Bring it.

Because. Pavlovian response and JOSH.

I loved Josh in Helping Hand and wanted his story!

So I may or may not have carefully read the blurb before starting this one.

Shock: Josh is a rentboy. Initial reaction: UGH. I am not a fan of rentboy stories. They are typically too raw for me: too much angst, bad pimps, even worse tricks.

But this is Jay Northcote, and I TRUST.

Thank god I didn't chicken out, because this book is damn HAWT and tender and sweet.

When Josh meets Rupert at a bar, he wants the tall red-head (GINGER ALERT!). But Josh only has sex for pay. Why should he make an exception for Rupert?

"You can kiss me," Josh finally said. "This isn't pretty woman, you know."


Rupert is vaguely excited by the seediness of paying for sex; he's attracted to the lithe, dark-haired man and wants Josh any way he can get him.

The more time Josh and Rupert spend together, the more they WANT. Josh knows he needs to put some distance between himself and Rupert. He doesn't do feelings, and he can't possibly fall in love with a client.


Rupert is so far beyond caring, he'll spend all his inheritance just to keep Josh by his side. But when Josh starts acting cool and distant, Rupert pulls back too.

Despite the rentboy theme, this is not an angsty story. It's incredibly sexy (one of Jay's steamiest books to date, me thinks) and romantic.

None of Josh's other clients are on-page. It's hinted at that Josh sees other men after he meets Rupert (at least for a while), but that's Josh's JOB. It's his way of paying for school. It's his body, his choice.

Josh has also long accepted that a relationship is out of the question. But Rupert takes Josh out to lunch and to an art gallery, and asks him to be his date on a long weekend away. Josh can't resist.

This is not a slow-burn book when it comes to the sexual tension. After all, Josh takes money to sleep with Rupert. But slowly the lines begin to blur. All these messy feelings make things murky and complicated.

We briefly revisit with Jez and Mac from the first book, but this book is all about Josh and Rupert, both of whom are fully developed, likable MCs.

Josh is independent to a fault, self-assured, and genuinely nice. Rupert is a little shy and awkward, but a complete dynamo between the sheets.

These two are really good together, and the HEA is ALL THAT and more.

[Josh] kissed Rupert slow and deep, pulling him in close as though he was trying to meld their bodies into one. He wanted so much.