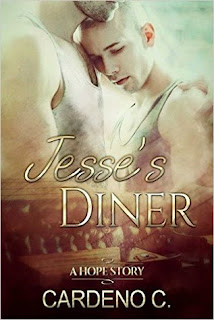 
Two men with a shared history and a mutual attraction must be honest with themselves and each other so both their dreams come true.

Quiet, unassuming Tanner Sellers spends his time running a diner in Hope, Arizona. Not particularly social, twenty-two-year-old Tanner keeps to himself and enjoys his simple life, but he longs for someone to call his own. In his most secret fantasy, that someone is sexy Steve Faus. But Steve is his friend’s father and mentor’s widower and therefore off-limits.

Despite some challenges, thirty-nine-year-old Steve Faus has had a good life. He’s extremely successful at work, has a great relationship with his college-age son, and lives in a wonderful town. Eighteen months after losing his partner, the one thing Steve lacks is someone to share his life. If Steve is honest with himself, that someone is the young man he has known and cared about for years. Steve and Tanner want one another, all they need is a little push in the right direction to make both their dreams come true.

Reading CC is like biting into a warm cookie, wrapping yourself in a robe pulled straight from the dryer, or stepping into a cold movie theater on a hot summer day.

At 39, Steve is a young widower. He has a 20-year-old son, Mike, he adopted with his much older (recently deceased) partner.

Tanner is 22 and an honest-to-goodness virgin. Tanner is friends with Steve's son and has had a crush on Steve since he was 16 years old.

I loved Steve's attempts at flirting, which of course went right over Tanner's head.

Tanner is adorable, but a little clueless and not the sharpest tool in the shed. Tanner didn't read as a particularly dynamic character, which was a little problematic since he's our first-person narrator.

Steve has a medical condition that's central to the story but not really discussed. I wanted more details about Steve's treatment. This is an important, complex topic, and it wasn't given enough page time.

There isn't a lot of plot here. It's mostly smiles, touches, and passionate first-times.

The story was over far too quickly (mostly because CC's writing is SO accessible) but filled with steamy bits and moments of pure sweetness.

Recommended if you're in the mood for a warm cookie or two. This one's delicious, and it'll be gone before you know it.

"I want to try something," [Steve] whispered as he skimmed his fingers down my back. "Tell me if it's too much."

"I'm a twenty-two-year-old virgin lying on the sex god I've had a crush on since I was sixteen. There is no 'too much' in this scenerio."

I'm alone, inside the world of the story. My favourite feeling in the world.


Download links are provided as a courtesy and do not constitute an endorsement of or affiliation with the book, author, publisher, or website listed.