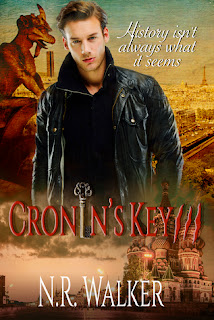 
History isn’t always what it seems…

Twelve months after his change, Alec MacAidan is still getting used to his many vampire talents. While most vampires would give anything to have more than one supernatural power, Alec craves nothing more than peace and time alone with Cronin. But when Alec meets entities from outside this realm, he’s left powerless in their presence.

Zoan are half-lycan, half-dragon creatures that have slipped through time and reality, seemingly undetected by man and vampire. Or have they? They bear an uncanny resemblance to gargoyles, leaving Alec’s view on all things weird to get a whole lot weirder.

This new quest leads Alec, Cronin, and their band of friends to Paris, Rome, and Moscow, where they learn that gargoyles aren’t simply statues on walls. In the underground pits beneath churches all over the world, Alec discovers the Key’s true destiny. Facing the Zoan might take every talent he has. And he may need help from the dead to get them all out alive.

Even though book 2 had a satisfying ending, I thought some loose ends needed to be tied up: What kind of powers does a human key retain when he becomes a vampire? Do other vampires accept Alec's inconceivable strength even though he's young and thus relatively inexperienced?

Cronin's Key III answers these questions and takes us on another quest where Alex, Cronin, and company battle evil.

This time it's not mummified or terracotta vampires but the Zoan (lycan-like creatures with great powers who slipped through a portal when Alec was turned).

Cronin and Alec are as devoted to one another and in love as ever.

Eiji and Jodis are still charming and feisty, and we revisit some old favorites, including Jorge, the child vampire, and Johan, who gave his life for Alec in book 1.

There's not a lot of steam in this story, but after the last two books, I knew not to expect much.

There's a reason these books are numbered and not titled. There's nothing new here. The formula remains the same, and this story dragged a little for me.

But the ending is truly ROMANTIC & SWEET. These two deserve a perfect HEA, and they got one.

"I want forever," [Cronin] growled, angry now. "It may be selfish of me to ask for it ... But I want forever with you, and I will kill anyone who tries to take that from me."

Alec swallowed the lump in his throat. "Shhh." He let the Scottish music play again in their heads. "Dance with your husband."

And there in their private field at Dunadd, they danced.