Blogtour: Justice For Me by BJ Grinder and TS McKinney

Please say hello to BJ Grinder and TS McKinney with 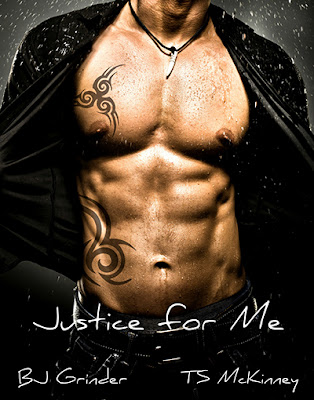 All Malachi wanted was to forget about the shit-show they’d all just endured with Victor and Nicholas and spend the rest of his life with the love of his life…Megan. That’s what he thought he wanted. What he found out was that giving up his desire to be a Dom isn’t as easy as he thought it would be and Megan isn’t about to pretend like she is sexually submissive. Not gonna happen! They love each other tremendously but just need another…addition to their party of two. Malachi needs an obedient, quiet, and trained male submissive to fulfill the Dom inside of him. Megan needs a submissive that has enough experience in the BDSM world that is still new to her.

That isn’t what either of them gets.

Justice Conners. He’s the opposite of everything they wanted…but is he just what they both needed?


“Take your sweats off.”
Malachi’s demand came in the sexiest sounding voice he’d ever heard.  It was deep and husky, firm and unyielding.  Prickling sensations started at his scalp and worked its way down the rest of his body, leaving him humming with the same feeling he’d gotten the minute Malachi had slapped those cuffs around his wrists last night.
“Wh…what?  He stuttered like a stupid school kid.  Instead of sexy like Malachi, his voice sounded several octaves higher than normal.
“Take.  Your.  Sweats.  Off.”  Malachi’s eyes swept the boy from top to bottom, loving the way his exhausted muscles were quivering and coated with sweat.  A man’s body was always more beautiful after pumping iron; muscles standing out and begging to be seen.
Violet eyes challenged pale blue eyes.  Shyness struggled with desire.  Heterosexual battled against…what the fuck am I doing?
Sweat pants came off and were tossed aside.  “Okay.  Sweat pants gone.  What now, Malachi?”
Malachi’s breath came out in a huff.  The kid’s body was…
Damn, he wanted to dominate, punish, and fuck this kid so badly.  More than that, he wanted Justice to want it.
“I’m going to look at you.  Stay still; arms out to your side and legs spread.”
The kid moved into position without the slightest hesitation.
Malachi walked around him, admiring every detail in the work of art formally known as annoying Justice. The boy’s eyes glittered as he watched Malachi watching him.  No; nothing submissive at all in that gaze…until Malachi demanded it of him.   The defiance was…fetching.  He’d never found it attractive in a sub before, but it fit Justice well.
His fingers grazed his shoulders, tracing the length of firmly muscled arms until he reached a wrist.  He’d noticed the boy had a tattoo around each wrist, like a bracelet of some kind.  Looking closely now, he saw it was decorative letters.  FOCUS; on the right wrist.  LET GO; on the left wrist.  He also noticed the kid tensed up like a man at his first prostrate examination the minute his fingertips touched the first wrist.
“What do these words mean?”


We got to ask the characters a few questions....

1. Now that you’ve gotten together, what comes next?

Malachi – I have so much to teach both of them…


2. What was the hardest thing for you to overcome that you didn’t expect to be an issue?

Justice – learning to not ‘let go’ when things get tough.

Megan – dealing with two men; they are clueless most of the time…but so effin’ hot!

Malachi – believing that I’m worthy of Megan and Justice


3. Who or what makes you laugh out loud?

Megan – Malachi trying to be funny.


4. What is your favorite ice cream flavor?


5. What movie will you watch over and over again?

Megan – Hocus Pocus, for sure. Now, Malachi is going to say he doesn’t watch movies but I may or may not have seen him watching Marley & Me about a dozen times. How in the hell does he get something in his eye every single time at that really, really sad part?


TS McKinney lives in East Tennessee with her high school sweetheart/husband and all the countless dogs she picks up from deserted country roads. Her professional career has been in business but her heart has always belonged to the fantasy world found in books. Creating wicked worlds where one can meet the perfect hero – and then do anything to him that you want – has been a hobby that has brought her plenty of hours of fun and naughty entertainment. When not working, reading, or writing, she loves to spend time with her family and forcing them (because they don’t really have another choice) to allow her to redecorate their houses…and listen to her naughty…sometimes sadistic stories.

BJ Grinder lives in Smalltown, Tennessee where the residents know everything and everyone (not always a good thing). She enjoys writing, zombies, and garage sales. She has an unhealthy relationship with her Kindle, which demands most of her time – at least what her 4 children don’t take up!