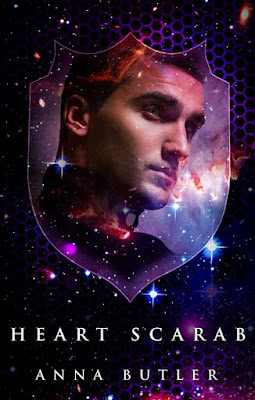 Telnos is an unpleasant little planet, inhabited by religious fanatics in the festering marshlands and unregistered miners running illegal solactinium mines up in the hills. But the Maess want Telnos, and Shield Captain Bennet’s job is to get out as many civilians as he can—a task that leaves him lying on Telnos while the last cutter of evacuees escapes in the teeth of the Maess invasion.

Bennet is listed missing in action, believed dead on a planet now overrun by Maess drones. His family is grieving. His long-term partner, Joss, is both mourning and guilt-ridden.

And Fleet Lieutenant Flynn? Flynn is desolate. Flynn is heart-broken… no. Flynn is just broken.


Flynn liked kissing. In fact, Flynn considered himself something of an expert in the art. He'd tried it in all its forms, from the first tentative pressing together of juvenile lips that had you wondering what all the fuss was about, to the discovery that if you just opened your mouth and, you know, kind of moved everything, your tongue suddenly had a lot more positive uses than just allowing you to articulate clearly and swallow things without choking. Flynn got the hang of it, ran with it, and never looked back.

Flynn had not only tried them all, he'd made them his own. He was considered by all the relevant authorities to be rather a specialist in the area.

Flynn really liked kissing. He had been gratified by the discovery that Bennet liked it too. Because now he could add slow kisses to the repertoire. Kisses so leisured and intense the world came to a stop while a hot tongue moved over his lips, explored each and every tooth down to the last molar, while teeth pulled at his bottom lip, biting it gently until it was swollen and hot and heavy, and he had to lick his lip to cool it and met Bennet's tongue with his. Only then, would Bennet's mouth close over his and start a real in-earnest kiss that lasted several more centuries. Those were kisses Bennet seemed to specialise in.

Flynn was always willing to take tips from another expert. A man should always try to extend his technique.

We had an opportunity to ask Anna a few questions...


Hi Anna, thank you for agreeing to this interview. Tell us a little about yourself, your background, and your current book.


First, thank you for hosting me today. I’m delighted to be here.

Heart Scarab is the second of the Taking Shield series, which charts the life and loves of Shield Captain Bennet. Taking Shield is both a sweeping sci-fi story (old school sci-fi with spaceships and lasers, aliens and handsome heroes) and an equally sweeping love story. I should warn you, though, that it isn’t a romance in the sense that it won’t be what most m/m romance readers would expect.

Thousands of years after an alternate-universe Earth went dark, the people of one of her colonies, Albion, are struggling in a war that’s probably unwinnable, against aliens called the Maess. Although humans have been fighting the aliens’ cyborg drones for over a century, they haven’t seen a real, organic Maess. Set against the war, is the love story between Bennet and Fleet Lieutenant Flynn. They meet in the first book, Gyrfalcon, but for various reasons theirs isn’t going to be an easy love. They meet and part several times before the end. In Heart Scarab, Bennet’s return after being declared missing in action, presumed dead, puts intolerable strain on his relationship with his long term partner, Joss, but paves the way for a reunion with Flynn.

As for me, I worked for the UK civil service for many years as a communications specialist, working on everything from marketing employment programmes to running an internal TV service. These days I’m concentrating on trying to make it as a writer, combining my love of old school science fiction and m/m themes. I live in London with my husband and our cockapoo, Molly. We’re currently house hunting, looking for a country retreat.

Tell us something no one else knows about your characters.

Shield Captain Bennet could win Dancing With The Stars. He has medals for classical dance. And while he’ll grudgingly wear his military medals, he keeps pretty quiet about the others. He’s always self-deprecating about his dancing skills (not that it comes up often in the middle of an interstellar war, mind you) but the truth is that he was eighteen when he fell in love with Joss and he’d have done anything to please him. Even take dancing lessons. Joss is 17 years older than Bennet—rich, urbane, sophisticated, hedonistic, with a lively social life he expected Bennet to share. Joss loves dancing, ergo... Thing is, Bennet is all about control, in all areas of his life. Dancing, too, is about control. It's about pace and precision, combined with grace and rhythm. Bennet would never admit it, but he loves dancing and he misses it.

Flynn is pretty good at brick-laying. He was always destined for the military when he was finished with school, both because the state that had cared for him since his mother's death required pay-back from the citizen it had taken such care to create and because it was his best bet to learn transferrable skills (no university for him). He didn't want to enlist. He took the Academy scholarship. Logically, he didn't have a chance with a minimal education behind him but somehow he scraped through. His Academy scholarship gave him bread and board and books at the Academy in term-time for his entire four-years there. He managed for himself during the holidays—living in a hostel and working on construction sites. He graduated from the Academy near the top of his year and managed to get a plum posting to the Gyrfalcon. But he’s never forgotten how to build a wall. In more than one way.

Have you ever written something that made you cry?

I’m afraid I haven’t. I might claim that I’m not terribly sentimental, but I’m not sure that’s entirely true. I’ve certainly cried over other people’s books or over some films, no matter how many times I read the book or see the film. So all I had better claim is that I haven’t yet written anything where the emotion rips me apart as I write it.

Have you ever co-written with someone before?

Not for publication, but years ago when I wrote fanfiction. I wrote the first half of a weepy slashfic in what’s now a dead fandom, and sent that to my beta reader and friend with a note saying “I have zero idea where this is going!” She came back with the ending. I hadn’t expected that, but what she wrote worked really well. We went back and forth a few times to meld the parts together a little better, and then we posted it on the fanfic list. I think it was on e-groups, the precursor to Yahoo Groups, so you can tell how long ago this was! Most people on the list couldn’t tell where I left off and she began, so I suppose it was a success.

I don’t know that I’d do it again. I’m very fond of my characters and have a clear idea of where I want to take my stories. Trying to mesh with another writer whose style is different to my own, whose ways of characterisation may not be the way I’d do it… no. Too stressful. I’m too much the control freak these days!

What is the most difficult part of writing for you? Not to edit as I go along. I have a terrible habit of tinkering with what I’ve written so far, trying to perfect it, rather than ploughing on to the end and then editing in its entirety. It is a bad habit, because I can spend hours dithering over word choices and syntax when I should be forging on with the plot. Scrivener helps because it’s a separate folder and document for each chapter, so going back to the beginning to read is several steps more complex than in a word processing programme like Word. Scrivener is breaking me of some bad habits!

Anna Butler was a communications specialist for many years, working in UK government departments on everything from marketing employment schemes to running an internal TV service. She now spends her time indulging her love of old-school science fiction. She lives in the ethnic and cultural melting pot of East London with her husband and the Deputy Editor, aka Molly the cockapoo.