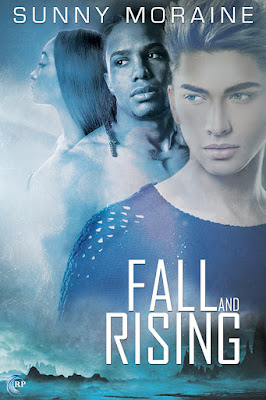 Adam Yuga is on the run. Three months ago, a miracle saved him from the deadly genetic illness that threatens the entire population of his former home, the Protectorate. Now he and his lover Lochlan are searching for a way to heal his people. When they receive a mysterious coded message promising hope, they make a desperate grab for it, and are imprisoned—by the very race they want to save.

On Lochlan’s distant homeship, a young pilot named Nkiruka faces an agonizing choice: stay with her lover Satya and live a life of happy obscurity, or become the spiritual leader—and the last and only hope—for the Bideshi. Nkiruka doesn’t want to lose Satya, but worse, she fears she lacks the strength to carry anyone through the coming storm, let alone her entire people.

Threads of chance and destiny draw the three together. With the fates of civilizations in their hands, they prepare for a final conflict that might be their only chance for survival—or that might destroy them all.

Welcome to the Fall and Rising blog tour!

Fall and Rising is a story I've been trying to make happen for some time. On finishing its predecessor Line and Orbit, I knew Adam and Lochlan's story couldn't be over. I knew, in fact, that it was just beginning. In Fall and Rising I wanted to continue to explore their journey, as well as the ways in which their tumultuous meeting and the battle that followed have affected the people they love. In short, this was a world I wanted to return to. I'm very pleased that I was able to do so, and I'm very excited to share the result with you.
On this tour I'll be talking about the process of writing the book and what it taught me about writing in general, the trials and tribulations of passing through the world of the story, some of the tools I used to put me into a place where I could tell that story, and some of why I wanted to write it at all. I'll also be giving away a signed copy of the print edition of the book, along with a set of two hand-made (by me) agate, copper, and glass beaded bracelets inspired by the world of Fall and Rising. Additionally, you'll have a chance to win one of two e-copies!

Fall and Rising didn't have the easiest path to publication (and I'm very, very grateful to Riptide for giving it a chance). Its precursor, Line and Orbit, was purposefully left open for a sequel, though I and my then-coauthor weren't completely certain there would be one. But we eventually decided to try to write one. We ran into trouble when she needed to spend more time with her dissertation (she's since graduated with her PhD, which is so awesome), so I ended up taking the project on alone. The initial draft of the book took a few months to write and I was reasonably happy with it, but once it was finished it struggled to find a home. It wasn't quite right for the publisher of Line and Orbit, so I had to take it back and stare at it and poke it for a while, and consider what my next move should be.

And the decision I came to - and it was not in any way an easy one - was that it didn't work.

I couldn't tell you exactly why it didn't work. Just that something about it wasn't quite right. It was in many ways a drastically different book from what it's since become, focusing on different characters (Adam and Lochlan were confined to the background) and operating on a much, much smaller scale. It told the story of an uprising on one of the Protectorate's colonized worlds, and the struggle to address the illness eating its way through half of humanity while also trying to overthrow an oppressive regime. It was an interesting story, and there was a lot about it that I liked, but I looked at it, turned it over and examined it from several angles and concluded that it couldn't be the sequel. I wasn't comfortable with it.

So I scrapped it.

That was hard. It's very hard to take something you worked on for months, that you put a huge amount of yourself into, and declare it almost completely unviable. That book will never be published; it's trunked on my hard drive and I haven't looked at it in over a year. But it had to be done, because I love this universe and I love these characters, and I wanted to tell a story I was proud of, that did them justice, and also frankly a story I thought I could sell.


So I rewrote it almost from scratch. I managed to salvage nearly all of one character's storyline - Nkiruka, the heir to the position of spiritual leader to her people - and many of her scenes, which only needed minimal changes in order to fit into the new draft of the book. That was a relief, because she was very special to me and also because I felt her story was necessary to the larger story I was telling (which will obviously come full circle in the forthcoming final book of the trilogy). But everything else had to change.

The conclusion I came to, with the whole book-universe spread out in front of me, was that I wasn't telling a small-scale story. The story as told in the first version of Fall and Rising would potentially work as a side novel, but as a lead-in to the final climactic confrontation between the Bideshi and the Terran Protectorate, it didn't get the job done. I needed to go back to big, while keeping things rooted in the tale of these specific people and their specific journey with each other.

In many ways the themes remained almost the same. Resistance to power. The intrinsic value of life, regardless of whether or not that life fits an ideal. The ability of love to triumph over adversity, but also love's limitations, and the strength it takes to sacrifice it for the greater good. The tension between one person's desires and the needs of the many. Those themes were central to Line and Orbit, and they're central to the overarching story as told in these three books. They provided a foundation from which to work, and in the end I had a rough version of what's been published.

And I saw it, and it was good. Good enough, anyway. It got the job done, and first and foremost that's what the middle book in a trilogy has to do.

Now it's become something I'm immensely proud of. I think it's a worthy successor, and I'm so happy it's a story I was eventually able to tell. If you pick it up, if you read it, I hope it's a story you enjoy, and a world you want to return to as much as I did.

Sunny Moraine’s short fiction has appeared in Clarkesworld, Strange Horizons, Nightmare, Lightspeed, Long Hidden: Speculative Fiction from the Margins of History, and multiple Year’s Best collections, among other places. They are also responsible for the novels Line and Orbit (cowritten with Lisa Soem), Labyrinthian, and the Casting the Bones trilogy, as well as A Brief History of the Future: collected essays. In addition to authoring, Sunny is a doctoral candidate in sociology and a sometimes college instructor; that last may or may not have been a good move on the part of their department. They unfortunately live just outside Washington DC in a creepy house with two cats and a very long-suffering husband.

Every comment on this blog tour enters you for the giveaway. Entries close at midnight, Eastern time, on September 5th. Contest is NOT restricted to U.S. entries. Don't forget to leave your email so we can contact you if you win!