Blogtour: Scent Of The Heart by Parker Williams

Scent Of The Heart 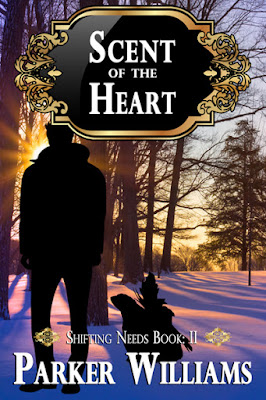 Casey Scott grew up being told he’d never amount to anything, and despite the unwavering love and support from his best friend, Jake, the idea sticks in the back of Casey’s mind. When he discovers he has a unique destiny in an enclave where shifters and humans live together, he seizes the chance, wanting for once in his life to be someone special.

Tsvetok Yerokhin lost his parents to the evil ruler of the enclave when he was a boy. The responsibilities of raising his two younger brothers nearly overwhelmed him and self-doubt took over. When the new Alpha and his Protector arrive in time to save his life, Sev is grateful, but he’s even more shocked when he scents his mate with them.

Casey isn’t prepared for the feelings that sweep over him when he meets Sev, but he refuses to act on them because he’s straight. Still, there is something so alluring about Sev that Casey can’t help being drawn to him.

As the two explore the edges of their new discovery, an evil returns, determined to control the enclave or destroy it. The Alpha and Protector are powerless to stop it, but Casey holds the key to victory. If he can discover what it is, he has a chance to save them all. To be the hero.

Unfortunately, the hero has to be willing to make the ultimate sacrifice, and for Casey that means losing his heart.


“This night is shot,” Casey mumbled. “Hakii, if you’re there, I’m sorry. I need to find him. I’ll try to be back as soon as I can. Oh, and if you’re not there, I hope you’re getting a damn good laugh at me talking to myself.”
The night air had chilled considerably. Casey threw on a sweater and hurried to the Alpha’s house. Before he could pound on the door, it swung open. Jake stood there wearing nothing at all.
“Oh god, my eyes.”
Jake sighed. “You’ve seen me before. A lot, if I recall correctly.”
“And every time I do, I remember that I need to create eye bleach.”
Jake faked a laugh. “Yeah, you’re hilarious. What do you want?”
“A guy came to my house tonight. His name is Sev, and I think he’s in trouble.”
All humor fled from Jake’s face. “What happened?”
Casey told him about the visit. “He…called me his mate. What the hell is that about?”
“Later. We’ve got to find him.”
In an instant, Jake transformed into a beautiful black jaguar. Zak came rushing to the door. “What is wrong?”

Before Casey could answer, Zak grabbed a heavy coat and squirmed into it. “Jake will track him. You will come with us.”
“Zak, he called me his mate. Why would he do that?”
“You worry about this now? I do not see where this matters. If you prefer, you may stay behind.”
Casey sobered immediately. “No, you’re right. I’m sorry.”
They tracked Jake as he hurried to the woods. When they heard him roar, Zak and Casey ran to the edge of the forest. Jake had transformed back to his human form and, man, was he pissed.
“Come out here, now,” he demanded.
There was no movement, but Casey heard a clicking noise, followed by the familiar stamping of feet.


“You spray me and I swear to the gods I will neuter you. Put your damn tail down and face us as a man, Sev.”

We had the opportunity to ask some questions of Sev and his mate Casey...

1. Now that you’ve gotten together, what comes next?

Sev: Well, I would have been happy with the two of us spending some time together, getting to know each other better. Even in a match arranged by the spirits, there needs to be an opportunity to find out who your mate is.

Casey: I agree with Sev, especially if it includes sex. I mean, seriously, how much better can you get to know a person?


2. What was the hardest thing for you to overcome that you didn’t expect to be an issue?

Casey: The fact that Sev is a man. Being gay was okay for Jake, and I supported him wholeheartedly, but when Sev first called me his mate, I was more than a little freaked out.

Sev: He was so freaked out, he went and got himself killed.

Casey: We said we wouldn’t talk about that.


3. Who or what makes you laugh out loud?

Sev: Casey makes me laugh. (Whispers: Though mostly it’s because he thinks it’s funny, and I want to humor him.)

Casey: I make myself laugh. Sev has all the sense of humor of a block of driftwood. Actually that can be said about most of the people in the enclave.

Sev: (Pats Casey’s hand) We have a sense of humor, my mate. We all laugh at you.


4. What is your favorite ice cream flavor?

Sev: We only have one milk-bearing creature in the enclave, at least if we don’t include shifters in that, and I will not milk a shifter. But we have a goat that gives us milk, and I tried to make some ice cream for Casey as a gift. I think it turned out nicely. I thought it was delicious.

Casey: I won’t deny. I never thought of goat milk ice cream, but when Sev gave me a dish of it? Oh my god, it was like heaven in my mouth.


5. What movie will you watch over and over again?

Casey: Sev has never seen a movie. Chances are good he’ll never see one. No electricity, no theater, no nightlife. But I wouldn’t trade it for anything.

Sev: Casey has told me about movies. I don’t understand the joy of spending hours of your life watching someone else’s life. If I want to know what someone else is doing, I’ll go sit and talk with them.


Thank you both. And Mr. Williams, of course.


Parker Williams believes that true love exists, but it always comes with a price. No happily ever after can ever be had without work, sweat, and tears that come with melding lives together. Living in Milwaukee, Wisconsin, Parker held his job for nearly 28 years before he decided to retire and try new things. He enjoys his new life as a stay-at-home author and also working on Pride-Promotions, an LGBT author promotion service.