ARC Review: A Shot At Forgiveness by Cardeno C. 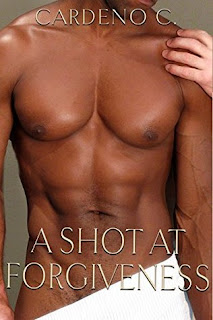 Sometimes to find love, you must first learn forgiveness.

But Isaac is tenacious and he has his heart set on the grown-up version of the boy he always wanted and never forgot. The way Isaac sees it, he and Rafi are perfect for each other, if only he could sink the most important shot of his life: his one shot at forgiveness.

I read the revised 2nd version.

This was smufftastic fun as most CC novels and novellas are, and as such I enjoyed reading it. The premise however would have lent itself better to a longer book instead of this quickly read novella, because the groveling and pursuit I expected wasn't quite there.

I had hoped that Isaac would have to do a lot more begging than what Rafi made him do, and I didn't quite buy that these two men after so much time apart, and having broken up in such a bad way, would then go from 'are you talking to me?' to ILYs in such a rapid time.

I did buy that Isaac was hellbent on getting Rafi back, but Rafi seemed to much like a pushover to me. Again, this is probably something that could have been better explored in a longer book.

Not CC's best work, I'd say. Still, the sexy times are hot, and it's a quick read.

**I received a free copy of this book from its author. A positive review was not promised in return. **

Buylinks are provided as a courtesy and do not constitute an endorsement of or affiliation with this book, author, or bookseller listed.