Today we welcome Huston Piner with 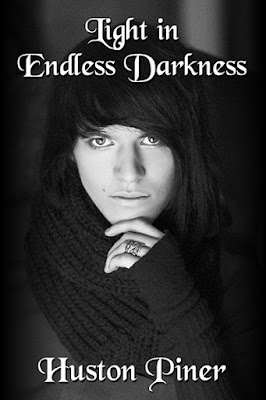 Kevin Reeves lives with his mother and abusive father and dreams of going to Dickerson University. Lonely and easily cowed, he works as a janitor to save money and signs up for night courses at the community college. There, he meets Dominic Pierce, a sexy emo who also happens to be blind. Kevin is immediately attracted to Dominic and soon a mutual attraction develops into a full-blown romance. After a violent confrontation with his father leads to Kevin moving in with Dominic, he discovers that the neighborhood gang is terrified of the blind emo, referring to him as El Sanguijuela.

Meanwhile, Jacky Larson, who outed Kevin as a sophomore, begins blackmailing him for sex at work, leaving him ashamed and panicked that Dominic will dump him if he finds out. But Dominic has dark secrets of his own, including a job he won't discuss that keeps him away from sunup to sunset and secret nightly excursions. Can Kevin get away from his blackmailer without losing Dominic in the process? Will he ever discover what Dominic does all day and where he sneaks out to every night? And can their love survive when Kevin finally uncovers the truth?


We were no sooner on the couch than Dominic had me in his arms and I was really flying. He nibbled on my neck, sending waves of pleasure through me. The sharp edge of his teeth grazed my skin, ready to bite into me. But he stopped and froze all over for a second, leaned back, and his sightless eyes betrayed a confused indecision that startled me. For a moment, he seemed lost. But before I could formulate words to ask him what was wrong, his expression changed, his lips returned to mine, and his tongue renewed its attack.

Friday night, his kisses had been tentative and delicate, but now he pressed his lips to mine with animal-like ferocity and gripped me in a powerful embrace. He licked and nibbled on my neck while unbuttoning my shirt, and then he nudged me forward to remove it.

I started to lift his pullover, but he pushed my hands away. His fingers explored my naked torso and roamed over every inch of exposed skin, adding to the tension building up inside me.

Huston Piner writes books prominently featuring gay characters. His first book My Life as a Myth was nominated for the 2014 Stonewall Book Award for Children's and Young Adult Literature and was a 2013 Rainbow Awards finalist. His second book, the highly anticipated Conjoined at the Soul, was published in February 2015. In the edgy Light in Endless Darkness, his first New Adult offering, he explores the supernatural romance of a gay vampire. Huston lives in the mythical town of Chadham, Virginia, with his partner and three domineering cats.