His prayers are answered. A perfect heart now beats in his chest, but it comes at a heavy price. The donor is an innocent young man cut down far too prematurely.

And Kory's blemished history is nowhere near an ideal match.

As his debts skyrocket, Kory can’t help but think his resolve to walk the high road is being tested. After he meets the adorable Will Squire at the gravesite they both visit, he’s doubly damned because there’s no way he can keep up his end of the bargain. What happens when a man breaks a deal with a higher power?

Will often prefers the company of the dead to that of the living.

Following a bad breakup, he pours himself into his two jobs—funeral director at his uncle’s mortuary and part-time paramedic. He’s drawn ever closer to Kory, as if fate sticks her fickle hand in and pushes them together like two unlikely puzzle pieces. But sometimes history can’t be buried, and maybe divine intervention isn’t always right. Will discovers everyone is imperfect, no matter how pretty the outer package, and opening one’s heart is never easy, but can be oh so worth the pain. 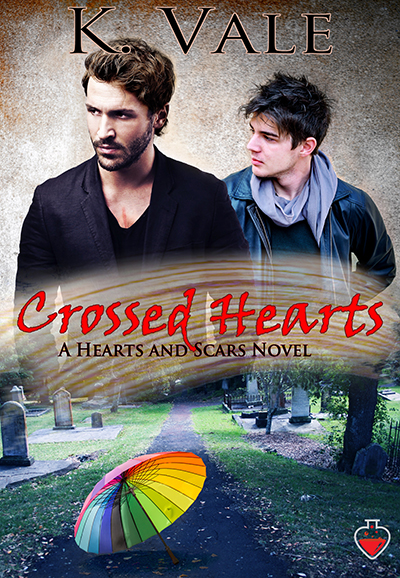 
The man scratched the scrub on his chin. “Heart recipient,” he said finally. “I’m Kory—umm…Kory Vansant.” Holding out his hand, he took another step. Will’s fingers were swallowed in warm skin and bone.
“Will Squire.” Again, he couldn’t tear his gaze from the tease of scar tissue jutting from the crotch of Kory’s shirt collar. The urge to reach out and trace a finger over the pink relief of healed tissue was strong. Just like I touched Brandon’s incision. The stark difference between the two—one wound marking the end of a life and the other a salvation—was surreal. Will was nothing but an outsider looking in on a miracle, but somehow he felt he’d come around full circle.
“Want me to get naked so you can see the whole thing?”
Will closed his eyes for a moment and then looked up, his face flaming with a mix of embarrassment and immediate, fierce arousal. “I’m sorry. Totally rude.”
Kory smiled good-naturedly. “No worries. It’s a way to reclaim who I am, or was. Or some crap. I’m not just my medical status, like they keep saying at my support group.”
“No. Of course you’re not.”
He laughed loud and deep, and the warmth in Will’s face drifted down his body. “I’ve adopted it as my little icebreaker whenever people stare,” Kory said.

Enter to win a copy of Crossed Hearts by adding it to your Goodreads "Want to Read" shelf. Kimber will pick a winner on release day.