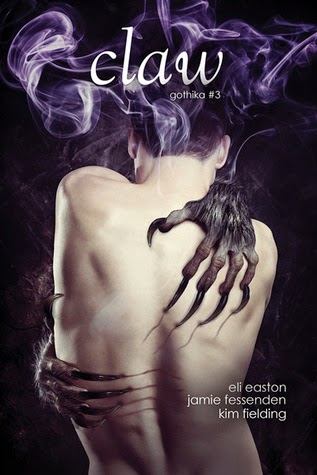 Beasts lurk in the shadows of wild and forgotten places and in the hearts and souls of men. They are the stuff of dreams and nightmares, but are they feral and savage, or just misunderstood? Creatures of myth and legend stalk these tales of dark desire and animal passions. Three men come face-to-face with such creatures and find they are much more than they seem. While there is danger, there might be unexpected benefits as well, if they can accept the impossible and dare to venture into the primordial regions where nature and the beasts still reign. Three acclaimed authors of gay romance explore the boundaries between man and beast and the place where their worlds overlap.

Isolation by Jamie Fessenden
When Sean’s marriage breaks up, he returns to his hometown, hoping to find the childhood friend who meant everything to him in his teens. He finds Jack living in a cabin, surrounded by the forest he always loved, and the two begin to tentatively repair their damaged relationship. But a large animal has been seen prowling around the edge of town, and soon Sean comes face-to-face with the beast. Jack insists the creature isn't dangerous—it's been coming around the cabin for years. It isn't long, however, before Sean discovers a far more disturbing connection between his friend and the beast.

Transformation by Kim Fielding
After being caught in bed with another male student in 1886, Orris Spencer is declared an abomination by his wealthy father. Orris is promptly banished from their Fifth Avenue mansion and sent across the continent to Oregon. Now Orris must try to find a place for himself on his brother’s farm and figure out how to deal with life as a pioneer. When he’s called on to help protect the livestock from a predator, he’s not at all certain he’s up to the task. Then he meets Henry Bonn, a strange and intriguing man who lives in a cabin in the hills. Orris’s attraction to Henry may not be an abomination—but it may prove a greater danger than banishment.

The Black Dog by Eli Easton
Constable Hayden MacLairty is used to life being dull around the tiny hamlet of Laide on the north Scottish coast. They get occasional tourists, “monster hunters” interested in the local legend of the Black Dog, but Hayden thinks that’s only a myth. A rash of sheep killings, a murdered hiker, huge footprints, and sightings of the Black Dog force Hayden to rethink the matter. With the help of Simon Corto, a writer from New York doing research for a book about the Black Dog, Hayden tries to figure out why the enormous hound is reappearing. Hayden finds himself strongly attracted to another person for the first time in his life. But between the danger stalking the hills, Simon’s inevitable return to New York, and Hayden’s mother’s illness, true love may be more of a phantom than the Black Dog.

Claw is the third installment in Dreamspinner's Gothika series, which includes:

Both of the previous anthologies in this series earned 4 stars from me.

Stich features two incredible stories from Fielding and Easton, and Eli Easton also knocked it out of the park with The Bird in Bones. However, both anthologies include a weaker "throw-away" story from a fourth author.

Claw is comprised of three stories by solid authors in the genre.

Eli Easton's The Black Dog and Jamie Fessenden's Isolation are contemporary, while Kim Fielding's Transformation is set in the 1880s.

All three involve wolf/canine shifters, have a mystery central to the story, and are fairly low steam (one smexy scene in each story).


Fessenden's story (~3 stars~) is creepy and sets a brooding tone, but I felt no connection to the MCs. I also didn't care for the non-ending, which leaves the reader with more questions than answers.

Fielding's story (~4 stars~) draws a realistic portrayal of Western frontier life during the late 19th century in Oregon. This is a poignant story about a man finding his way and opening his heart to something he yearns for but doesn't understand. One of the MCs, Orris (whose POV filters the narrative), is beautifully sketched, but I wanted to know more about Henry, the other MC, and found the epilogue too abstract.

Easton's story (~4 stars~) is probably my favorite, partly because one of the MCs is Scottish and (sort of) a Ginger. I couldn't figure out the mystery of the Black Dog, so this one had me guessing until the reveal at the end. This story also has the most romantic setting (hello, Scotland!), best slow burn, and strongest epilogue.

Overall, this is a solid anthology with three enjoyable stories featuring shifters. I highly recommend for lovers of paranormal who like a bit of bite with their romance.

Plus, the covers in this series are mesmerizing!