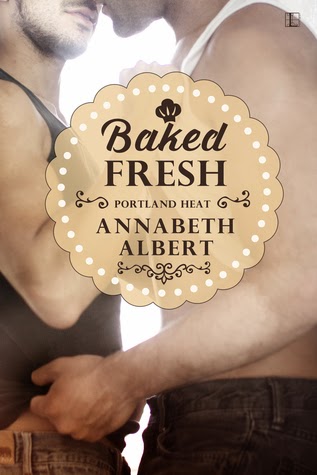 From its famous coffee to the mouthwatering fare at its cafés, restaurants, and bakeries, Portland, Oregon, has a lot to whet the appetite, including the hard-working men who serve it all up—hot, fresh, and ready to go—with no reservations…

Vic Degrassi is a baker on the rise, and it’s all thanks to his rare ability to make—and keep—his New Year’s resolutions. Whether it’s losing weight, giving up smoking, or graduating from culinary school, Vic goes after what he wants—and gets it. This year? He wants Robin Dawson, the sweet-hearted hottie who volunteers with him at the local homeless shelter. When he learns that Robin is suddenly single after being unceremoniously dumped, Vic is more than happy to offer a shoulder to cry on—or at least a fresh-baked pastry to bite into. But it’s been a long time since Vic’s gone on a date, and he’s nervous about risking his friendship with Robin. So when their flirtation turns into a steamy night together, Vic and Robin have to figure out if they’re friends with benefits or lovers in the making, and if Robin is ready for something more than just a rebound. There’s only one way to find out: turn up the heat.

It's official: Annabeth Albert is an auto-read author for me. Her writing is always polished, and her stories emotional without being overly angsty.

I enjoyed the first Portland Heat book, but I liked this one even more.

Vic, whose first-person POV filters this story, is not a perfect MC. After his cousin who was also his best friend drops dead from a heart attack at the age of 33, Vic has lap band surgery and loses more than 100 pounds in the course of a year.

Vic goes from big Italian bear daddy to average dude with a shaved head (which is far preferable to a receding hairline).

Vic still sees a fat man when he looks in the mirror. He's self-conscious about his body, despite spending hours at the gym each week, and his inner monologue is self-deprecating.

That did not annoy me as much as it made me sad. Vic just doesn't think any man, much less the gorgeous, much younger Robin, would go out with him.

At one points Robin tells Vic he looks like the Rock and Vin Diesel had a love child, which made me think Vic was much better looking than he gave himself credit for.

But Robin has a past and issues of his own. When the two men start hanging out (NOT dating *ahem*), their chemistry is immediate.


I loved the way Vic treated Robin. He was all toppy in bed and took control, something Robin desperately needed him to do.

Robin, who is unceremoniously dumped by his douchey boyfriend at the beginning of the book, insists he's through with men, but the more time he spends with Vic, the more the area between friends-with-benefits and the real thing blurs. Robin sees Vic, encourages him, pushes him a little.

When a tragedy strikes the homeless shelter where both Robin and Vic volunteer, Robin falls apart. But Vic is there to catch him.

This was such a sweet story, and not just because Vic is a baker and makes fabulous, delicious cakes and pastries (although that helped!).

The relationship between the men is tender and real; there is plenty of steamy, lightly kinky bits; and the ending is a totes smile-worthy HEA.

I am loving this series!