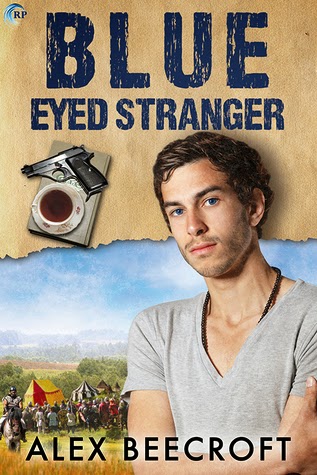 Billy Wright has a problem: he’s only visible when he’s wearing a mask. That’s fine when he’s performing at country fairs with the rest of his morris dancing troupe. But when he takes the paint off, his life is lonely and empty, and he struggles with crippling depression.

Martin Deng stands out from the crowd. After all, there aren’t that many black Vikings on the living history circuit. But as the founder of a fledgling historical re-enactment society, he’s lonely and harried. His boss doesn’t like his weekend activities, his warriors seem to expect him to run everything single-handedly, and it’s stressful enough being one minority without telling the hard men of his group he’s also gay.

When Billy’s and Martin’s societies are double-booked at a packed county show, they know at once they are kindred spirits, united by a deep feeling of connectedness to their history and culture. But they’re also both hiding in their different ways, and they need each other to be brave enough to take their masks off and still be seen.

Both the MCs, Martin and Billy, are involved in reenactment societies, Martin in one focused on ninth century Vikings and Billy in one with a focus on morris dancing, a type of choreographed English folk dancing that started in the fifteenth century.

The men eventually create a new music/dance troop, and their passion for their hobby is contagious.

I am a history buff, and British history is my favorite, so I loved the descriptions of costumes, music, battles, and dances. A few years back, I went to a medieval reenactment, complete with full-scale battles, at Caldicot Castle in Wales, and it was BRILLIANT.

Fair warning, however: If you are not interested in history and historical reenactment, the constant descriptions might prove a bit tedious.


Martin and Billy don’t date in the traditional sense of the word. They meet and immediately delve into a serious relationship.

Martin, who has a British mother and a Sudanese father, is deeply in the closet. Right after he meets Billy, he loses his teaching position. The head of the grammar school claims he spends too much time on his hobby, but it’s clear that she’s a racist bitch who tells Martin that his braids “smell” and suggests he cut them off.

Billy suffers from severe depression; during his lows, he goes into a kind of stupor where he can’t force himself to move. We get both men’s POV, and the depiction of Billy's depression is powerful and visceral.

Beecroft doesn’t hold back, sugarcoat it, or provide a magical cure, and I applaud her for that.

Billy and Martin’s relationship is one of comfort. They come to rely on each other. But Billy hates being relegated to “friend” status in public, and Martin becomes unhappy and unsettled when he can’t find a new job.

There is almost no steam in this book, just the barest hint of it in a couple mild frotting scenes. There isn’t even much sexual tension or kissing. The relationship feels strangely platonic.

This bothered me, but the sweetness, beautiful writing, and romantic HEA won me over anyway.

It was probably the most English thing Martin had ever done – morris dancing on the village green in front of the pub, while the drinkers who had come out from the bar to watch heckled them good-humouredly, and the ducks on the village pond quacked out of time with the thin fragile music of the harp.