Blogtour: Merchant Of Death by Lisa Henry and JA Rock

Today we welcome Lisa Henry and JA Rock with

The Merchant Of Death
(Playing The Fool #2) 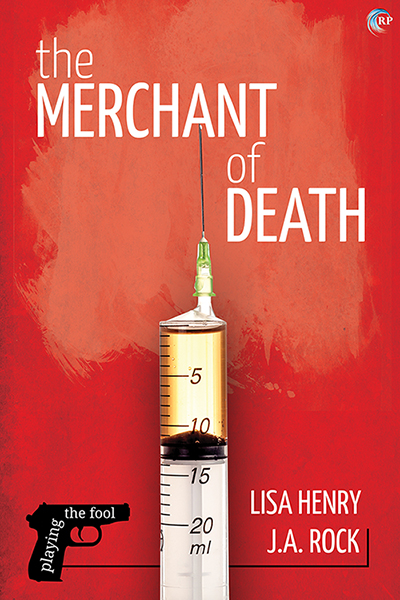 All’s fair in love and war.


There’s something rotten in the state of Indiana. When con man Henry Page takes it upon himself to investigate the death of an elderly patient at a care facility, he does so in true Shakespearean tradition: dressed as a girl.

FBI Agent Ryan “Mac” McGuinness has more to worry about than Henry’s latest crazy idea. Someone is trying to send him a message—via a corpse with a couple of bullets in it. He needs to figure out who’s trying to set him up before he gets arrested, and he really doesn’t have time for Henry’s shenanigans. Then again, he’d probably be able to focus better if Henry didn’t look so damn distracting in a babydoll dress and a wig.

But when Mac discovers that Henry has been keeping a secret that connects the cases, he has to find a way to live on the right side of the law when he just might be in love with the wrong sort of man.

Hi! We’re Lisa Henry and J.A. Rock, the authors of THE MERCHANT OF DEATH. We’re touring the web taking about our influences, our processes, anything we can think about actually, and even giving you guys a sneak peak or two! And what would a blog tour be without a contest? Check out the details at the bottom of the post to see what you can win!

Lisa: In our PLAYING THE FOOL series, one of our MCs is an FBI agent, and the other one is a con man. If you got to choose, which side would you rather be on: law enforcement, or law breaking?

JA: Since I seem to have a propensity for accidentally breaking the law--and since I am mildly obsessed with costumes--I think I would fit right in with Henry and his gang. But I swear I grew up trying to follow all the rules! It just...didn’t go so hot.

Lisa: Do you have a favorite PtF Character?

JA: I actually like Mac and Henry equally. But my favorite side character is Val. I might be a little in love with her. And I know she’s not a lesbian just because she wears sensible shoes--just let me dream!

Lisa: Would you rather…


...Go on a stakeout with Mac for twelve hours, or a shoplifting spree with Henry?

…Spend the day at the Indianapolis FBI field office with Val, or at the Court of Miracles with Stacy?

JA: As much as I want to spend a day faux-casually tossing my hair at Val and comparing notes on the sturdiness of our footwear, Stacy could teach me so much. But I don’t want to be anywhere near Carson, so I’ll spend the day at the field office. I hear there’s birthday cake there!


...charm an old lady out of money by pretending to be in love with her, or make an honest living farming goats in Altona?

JA: I LOVE GOATS! Also I don’t think I could charm anyone out of anything.

Lisa: Henry travels light, with only junk food, Shakespeare, and possibly some clean underwear. If the police pulled you over in a stolen car, what would they find in your duffel bag?

JA: I’ve been teased for years now about how when I graduated from college I stuffed my degree in a duffel bag and couldn’t find it for months. Because I truly can go months without unpacking a duffel bag. So they might well find my “Degree in a Duffel Bag”--along with chips and hummus, melting Magnum bars, and coats in various weights. I REFUSE TO BE COLD!

Lisa: If you had to sum yourself up in a Shakespeare quote, what would it be?

JA: I’ll go with “Confusion now hath made his masterpiece.”

Lisa: Indiana. Is there anything you need to get off your chest about the flatness of its landscape or the size of its lakes?

JA: THE BEST COVERS EVER. Sometimes I lick the donut one.

Lisa: We’ve written a ton of books together now. What should we write next?

JA: I hear the market is great for inspirational Southern fiction… *looks meaningfully at you*


Where to find Lisa Henry:

Where to find JA Rock:

Thanks for following our tour!

To celebrate our release, we’re giving away an awesome prize – an ebook copy of a novel of your choice from either of our back catalogs. We’re also giving away a $20 Riptide gift voucher, and Mac’s favorite coffee mug. What? It’s not like he’s supposed to be drinking coffee.

On February 12, 2015, we’ll draw a winner from all eligible comments! Be sure to follow the whole tour, because the more comments you leave, the more chances you have to win the prize!