Welcome to our second week of celebrating the amazingly talented

This week's post is all about TRU and JAVI, from the novel BEING TRUE, plus a list of Jacob's favorite things (which includes Mike, we're sure), and a chance to win a copy of Being True! 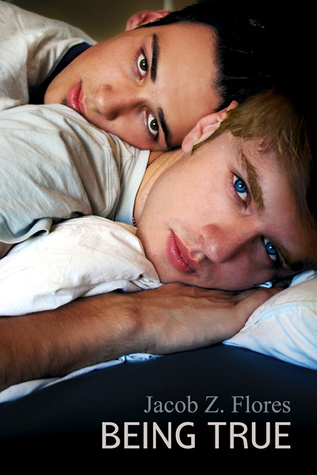 Truman L. Cobbler has not had an easy life. It’s bad enough people say he looks like Donkey from Shrek, but he’s also suffered the death of his policeman father and his mother’s remarriage to a professional swindler, who cost them everything. Now dirt poor, they live in the barrio of San Antonio, Texas. When Tru transfers to an inner-city high school halfway through his senior year, he meets Javi Castillo, a popular and hot high school jock. Javi takes an immediate liking to Tru, and the two become friends. The odd pairing, however, rocks the school and sets the cliquish social circles askew. No one knows how to act or what to think when Mr. Popular takes a stand for Mr. Donkey. Will the cliques rise up to maintain status quo and lead Tru and Javi to heartbreak and disaster or will being true to who they are rule the day?


He pushed himself off the door upon which he’d been leaning and suddenly noticed me standing slack-jawed in the middle of the room. His eyes caught mine, which made my dick jump within its denim prison, and for the briefest of moments, time slowed to a standstill.

Gazing into his eyes was heavenly and momentous, like watching a comet streak through the night sky. It also unleashed a flurry of sparrows in my stomach, which decided to take flight at once, flapping their tiny wings with all their might. If they flapped any harder or faster, I’d likely soar above the classroom, which, even though that would be pretty darn cool, would probably just alienate me further from my classmates.

I wouldn’t be that cool kid who could fly. I’d be that weirdo who couldn’t keep his feet on the ground.

“New kid, huh?” he asked as he crossed over to me.

I nodded. What else could I do? My lips could only tremble, and I had to keep my cock from burrowing through the book to the other side.

“I’m Javi.” He extended his hand, and his lips broadened into a genuine smile.

“Truman,” I finally responded. “But friends call me Tru.”

I winced at my stupidity. Now that I’d made that little revelation, everyone would make certain to address me as Truman. No one wanted to be the new kid’s friend.

“Nice to meet you, Tru,” Javi said without missing a beat. He gave my hand a friendly squeeze before withdrawing. He spun around to the shocked looks on the other students’ faces. They couldn’t have been more dumbfounded than I was. Javi didn’t even acknowledge their collective horror. Either he didn’t see it or he didn’t care.

Tru(man) Cobbler is a teenager entering a new school, again, in this wonderful YA novel. He hasn't had an easy life, with a bullying, drunken stepfather, who (thankfully) met his demise at the front end of a semi truck, but things might be looking up. But Tru is gay, and not into sports, and he just knows that the kids at his new school are not going to like him.

Except nobody gave Javi Castillo that memo, and while he might be a jock, admired by most kids in the school, what with playing for the football team, he doesn't let anyone dictate with whom he can be friends. He meets Tru, and the two strike up an immediate friendship.

Tru thinks it's all too good to be, well, true, but as the plot progresses, and Javi's status in the school extends to Tru, the two boys fall in love. But being gay is one thing - being gay and out in high school, in St. Antonio, TX, is quite another. Especially with Javi needing that football scholarship to go to college, they can't be open about their relationship.

What I really liked about this novel were the nuanced, honest and mostly realistic characterizations of the two main characters. It's rare that a novel pairs a white character with a Hispanic one, and I appreciated that it was done here. And done well.

Neither Tru nor Javi come from affluent backgrounds, and I liked that too. Not everyone is rich and beautiful, and I'd rather have average, relatable characters in YA novels.

I did like Javi's parents quite a bit - they were supportive of their own son, knowing this preference for the same gender, and extended their welcome to Tru, making him feel like part of the family. I also liked that both of them had chores, that not everything was done for them.

Tru's mother too was supportive, though she and Javi's parents had some rather strict rules for the two of them - no sexual contact until they graduate high school. So while the language within is explicit, and the boys partake in a lot of snogging and cuddling and touching, nothing is happening below the waist except for, well, what teenage boys do when alone. I thought that the rule was perhaps a little too harsh, though I must credit the author for creating characters for whom it made sense that they would obey their parents. The loving relationship they had with Javi's parents, and Tru's mother, went a long way to explaining why they would listen to that rule, despite their raging teenage hormones.

There is conflict, too, and there was a heart-stopping moment toward the end that had me on edge, but throughout the book, it's made clear time again that the lesson is believing in yourself and being true to yourself. Standing up for what you believe in, even if that opinion isn't popular. Standing up for others, standing up against bullies, and first and foremost standing up for yourself.

The writing flows well, easy, and with good pacing. Sweet moments at home are happening as much as situations at school, and while there were some tears on my end, there were also plenty of heartwarming moments that kept the novel form becoming too angsty.

** I received a free copy of the book from the publisher. A positive review was not promised in return. **

I’ve been asked to share a list of my favorite things. At first, I thought this is going to be easy peasy. But as I sat down to write, my brain shut off. Don’t you hate it when that happens? So, I’m going to try a little free writing exercise. I’m just going to list a bunch of my favorite things in no certain order. Sound good?

So here we go!

1. Spending time with my daughter. This is my most favorite of them all. (Okay, so I guess there is some order here, huh?) I would be lost without her, so whenever we get quality time together, I eat it up!

2. Spending time with Mike. I just love this man! When the world gets big and scary, his arms make me feel safe and loved. I don’t know where I’d be without him.

3. Musicals. OMG, I love watching a good musical on Broadway or on TV. Wicked is my all time favorite of them all. Mama Mia is a close second.

4. Horror Movies. Ever since I was a kid, I’ve loved these. Alien is the best scary movie ever!

5. Writing. Like that’s a surprise, being that I’m an author.

7. Dark chocolate. I could eat myself sick on the stuff. Okay, so maybe I have. What’s your point?

8. Provincetown, Massachusetts. Okay, so this is more of a place than a thing, but it’s one of the best places on Earth. If you haven’t been there, you really should.

9. My childhood best pal, Silver. He was a Weimaraner, and the best buddy a boy could have. I still miss him dearly. He was such a good boy.

10. Baked spaghetti. I’m not much of a cook, but this was one of the first meals I made that my daughter actually liked. Since then, it’s been a favorite of both of ours.

11. It by Stephen King. This book terrified me when I first read it. That’s why I absolutely love it. I still hate clowns though!

12. Thunderstorms. There’s just something about them that inspires my creative muse. I love to sit with the window open and write or read.

13. Cuddling in bed. One of my absolute favorite past time. There’s nothing better than lounging around with your arms wrapped around the one you love.

14. Tennis. I’ve enjoyed playing tennis since I was in high school. I rarely play it these days, but whenever I have the chance, I jump at it.

15. The color black. Because it’s so slimming.

16. “Edge of Glory” by Lady Gaga. It’s a special song for me and my boyfriend.

19. Time alone. While I’m not a hermit, I enjoy some time by myself, where I can be alone with my thoughts and just completely unwind.

20. Doritos. Really, most chips would do. If I’m not careful, I could eat a whole bag. Not that I would know from personal experience or anything. I’m just saying.

Summers in Provincetown, Massachusetts, provide Jacob with inspiration for his fiction. The abundance of barely clothed man flesh and daily debauchery stimulates his personal muse. When he isn’t stroking the keyboard, Jacob spends time with his daughter. They both represent a bright blue blip in an otherwise predominantly red swath in south Texas.

Thanks for joining us today. Be sure to come back next week for more about Jacob and his books, a true story from Jacob's life, and of course another chance to win!