ARC Review: He Completes Me & Where He Ends and I Begin (Home Series) by Cardeno C Not even his mother’s funeral can convince self-proclaimed party boy Zach Johnson to tone down his snark or think about settling down. He is who he is, and he refuses to change for anyone. When straight-laced, compassionate Aaron Paulson claims he’s falling for him, Zach is certain Aaron sees him as another project, one more lost soul for the idealistic Aaron to save. But Zach doesn’t need to be fixed and he refuses to be with someone who sees him as broken.

Patience is one of Aaron’s many virtues. He has waited years for a man who can share his heart and complete his life and he insists Zach is the one. Pride, fear, and old hurts wither in the wake of Aaron’s adoring loyalty, and as Zach reevaluates his perceptions of love and family, he finds himself tempted to believe in the impossible: a happily-ever-after. 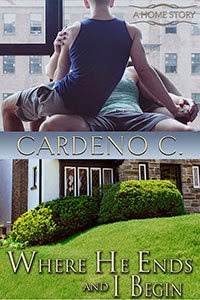 Aggressive, physical, and brave, Jake Owens is a small town football hero turned big city cop who passes his time with meaningless encounters believing he can’t have who he really wants: Nate Richardson, his best friend since before forever. Thoughtful, quiet, and kind, Nate is a brilliant doctor who has always known who he is and has never been able to shake his crush on loyal, courageous, straight Jake.

After a passionate night together, Nate realizes Jake isn’t as straight as he assumed, but he worries that what they shared was a fluke, a result of too much closeness for too long. For Jake, the question isn’t how they ended up in bed together because he has always known that Nate holds his heart, it’s how he’ll convince Nate that he wants and needs to stay there.


These books are part of Cardeno C's seven-book Home series. They can be read as standalone novels in no particular order, even though the MCs are connected by friendship, family, and/or location and are mentioned in each other's books to lend a feeling of community and continuity.

My reviews apply to the second edition of these books published in 2015, which include a bonus chapter originally published in Marriage: A Home Series Celebration.

We first meet Zach and Aaron in Home Again. They are an established couple by then. This book goes back in time and tells their story as filtered through Zach's first-person POV.

Because most of the stories in this series run parallel to each other, we meet Clark here before he reconnects with Noah. When Clark sees how lovey-dovey Zach and Aaron are, he decides he needs to return home.

But back to Aaron and Zach: Aaron falls in love with Zach the second he sees him, even though Zach initially pushes Aaron away and acts like a spoiled, thoughtless jerk.

Exhibit 1: The night the men meet, Aaron invites Zach to a party, only to have Zach do something impulsive and unforgivable (in my book). Zach never apologizes, and Aaron takes care of him all night.

Exhibit 2: In the months they are apart, Aaron calls Zach every night and tells Zach he loves him at the end of every conversation. Zach never calls Aaron and never says "I love you."

Exhibit 3: Aaron doesn't dare ask Zach to be monogamous, even though it hurts his heart to think of Zach with other men. Zach isn't sleeping with anyone else but never tells Aaron that.

Bottom line: Zach initially acts like a selfish douche, and Aaron is the world's biggest doormat.

Zach's brother Dean and his wife Kimberly are good friends of Aaron's, and by good friends I mean: Aaron cleans their house, cooks their dinners, and watches their three children. Aaron moves to town to take over Kim's ailing veterinary clinic and works with NO PAY for months.

Conclusion: Aaron is like Jesus but with sexual prowess.

Granted, the balance of power shifts once Zach moves to be with Aaron and starts giving back.

I quite enjoyed the second half of the book and also the SEX; dear god, yes, I enjoyed that lots and lots.

You would hardly believe Aaron was a virgin! *ahem*

The ending is blindingly happy, especially with the bonus chapter.

It's like a three-layer cake with icing and sugar sprinkles and cotton candy spun on top: SO DAMN FANCIFUL and SWEET, you just can't stop eating it.

Where He Ends And I Begin

Fluffy pink unicorns dancing on rainbows have NOTHING on this book.

This is the ultimate GFY, opposites-attract, BFFs-to-lovers story. The book BEGINS with a HEA, and the rest is just layer upon layer of happy, sexy, and delicious.

Nate and Jake have been friends FOREVER. They were born on the same day in the same town to moms who were besties, and have been each other's everything always.

Nate is the quiet, brilliant, slightly geeky one, the scientist and doctor, the light to Jake's dark.

Jake is self-assured and broody, an athlete and cop ready to take and protect what's his.

Nate comes out to Jake when the MCs are 13, but Nate assumes Jake is straight, what with Jake screwing every girl in a 50-mile parameter.

Once that little misunderstanding of Jake's sexuality is cleared up (around the 13 percent mark), the rest is SEX and light angst (Nate not trusting that Jake will want him long-term) and SEX and a visit to see the family and SEX and Jake rescuing a prostitute and her baby and SEX and more SEX.

If everything seems too right, that's because it is: perfect and easy and good.

Like with the other books in the series, the ending felt a little rushed. Big, life-changing decisions (moving back home, adopting a kid) were summarized in a few paragraphs, and the actual costs and logistics were pretty much brushed aside.

This book isn't particularly realistic. But it's fucking awesome, a fantasy of that forever and ever kind of love where family and friends are loving and accepting; the new police sheriff is glad that you're gay and wants you to OWN IT; and you don't know where you end and he begins.

ARCs of these books were provided by the author in exchange for an honest review.