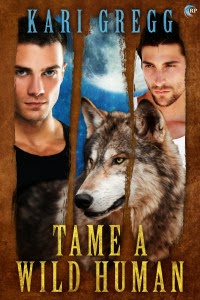 Drugged, bound, and left as bait on the cusp of the lunar cycle, Wyatt Redding is faced with a terrifying set of no-win scenarios. Best case: he survives the coming days as a werewolf pack’s plaything and returns to the city as a second-class citizen with the mark—and protection—of the pack. Worst case: the wolves sate their lusts with Wyatt’s body, then send him home without their protection, condemning him to live out the rest of his short life as a slave to the worst of humanity’s scorn and abuse.

Wyatt’s only chance is to swallow every ounce of pride, bury his fear, and meekly comply with every wicked desire and carnal demand the wolf pack makes of him. He expects three days of sex and humiliation. What he doesn’t expect is to start enjoying it. Or to grow attached to his captor and pack Alpha, Cole.

The entire book consists of Wyatt, a 28-year-old human, being gang raped by a pack of wolf shifters. The pack alpha, Cole, eventually makes Wyatt his and keeps him as a fuck toy.

There is no world building. We are told that once a month when the moon is full, the mean wolves come out to rape and pillage, so people hide and fortify their doors against attack.

There is no relationship development. Cole gives Wyatt some of his blood, so Wyatt becomes a lust-filled bitch. Cole treats Wyatt like an inconsequential play thing and expects full submission.


Once Cole fucks and knots Wyatt while Cole is in wolf form, and that time Wyatt wants it.

Cause he's a lust-filled bitch. Obviously.

There is no romance. There is no character development. Wyatt is straight. But he learns to take it up the ass like a champ.

It's that or be eaten. No contest.

Smex is fantastic, but plot and tenderness are even better, and this book was lacking both.