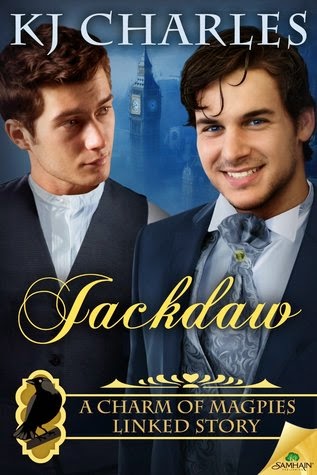 If you stop running, you fall.

Jonah Pastern is a magician, a liar, a windwalker, a professional thief…and for six months, he was the love of police constable Ben Spenser’s life. Until his betrayal left Ben jailed, ruined, alone, and looking for revenge.

Ben is determined to make Jonah pay. But he can’t seem to forget what they once shared, and Jonah refuses to let him. Soon Ben is entangled in Jonah’s chaotic existence all over again, and they’re running together—from the police, the justiciary, and some dangerous people with a lethal grudge against them.

Threatened on all sides by betrayals, secrets, and the laws of the land, can they find a way to live and love before the past catches up with them?

A thief, a windwalker, an imp: Jonah has been used and shattered. He is the man holding Crane's picture at the end of Flight of Magpies.

He is the one who rips it and runs. Jonah always runs. It's what he does best.

He leaves his lover, Constable Ben Spenser, to deal with the fallout. Ben loses everything: his job, his family, his respect. Ben is serious and broody, the earth to Jonah's air. He's bitter and resentful, understandably so.

But Jonah had reasons, and he'll tell Ben if only Ben will listen.


This book is set in the magical, complex, whimsical world of Crane and Day and will make much more sense if you read the A Charm of Magpies series first. After all, I couldn't even write this review without mentioning Stephen and Lucien.

Stephen Day has not forgotten the torn picture of his lover. When Day finds Jonah, a very much reformed Jonah, mellowed and held by Ben's steady presence, he wants to carry out an appropriate punishment. And he has Crane and Merrick, or as Jonah puts it:

The right noble earl of Crane. Six foot three of money, mouth and cock. And his pet murderer.

This is all hard to take, because there is no RIGHT. Jonah did lie, and Ben WAS betrayed. But nothing was ever done without love.

It was near impossible not to feel sorry for Jonah in this book; he is flawed and reckless but so full of energy and life, and his adoration for Ben knows no bounds:


You see? This book has all the feels, and I cried ALL the tears.

But there's comfort too, and lightness and laughter, and PASSION with moans and kisses and tender touches in the dark.

Charles's writing is exceptional, bar none: the sharp dialogue, the humor, the vivid descriptions, the three-dimensional, imperfect characters.

There's an inn keeper who sees all, a feisty 8-year-old, a drunk who'll vouch for his bucca, a near tragic ship wreck, sweet love making on a cliff, and a rather forgiving Mrs. Merrick.

And all is right with the world.