Today we welcome Aleksandr Voinov and L.A. Witt with 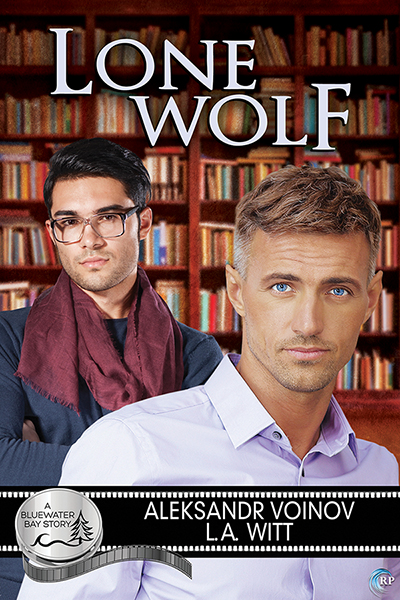 Hunter Easton is screwed. Fans, producers, and his agent are all chomping at the bit for the next book in his wildly popular Wolf’s Landing series, but he’s got epic writer’s block and is way behind deadline. Then he reads The World Tree, a fanfic novel by his online friend “Lone Wolf.” It isn’t just a great story—it’s exactly what the series needs.
Kevin Hussain is thrilled when “Wolf Hunter” wants to meet up after reading The World Tree. When Wolf Hunter turns out to be Hunter Easton himself, Kevin is starstruck. When Hunter tells him he wants to add The World Tree to Wolf’s Landing, Kevin is sure he’s being pranked. And when their online chemistry carries over—big time—into real life, Kevin is convinced it’s all too good to be true.
The problem is . . . it might be. The book deal, the sex, the money—everything is amazing. But fame isn’t all it’s cracked up to be, and Kevin is left wondering if Hunter really loves him, or just loves his book.

The idea behind Bluewater Bay
(A note from Aleks)


I remember chatting to LA Witt a while ago, and we were talking about Tucker Springs, which was the previous small-town romance series. LA said she really enjoyed the format, and she was a bit bummed that it had ended.

So, in my madness, I suggested creating another one—obviously not a copy of Tucker Springs, which has loads of fans and was very successful. I was thinking something a little bit geekier, weirder, maybe, with some big-town elements and some small-town elements, more diversity (and a good reason why the place would be more diverse than maybe the average fictional small town), and an overarching plot.

Lori was immediately on board, and we started brainstorming right into a first “bible”, then we approached Riptide and got them on board to support the whole thing.

So, yeah. It was a total “wouldn’t it be cool if” moment. I love building settings. If you’ve read any of my books set in London, for example, I tend to treat setting very much as an important part of the plot and characters. One reviewer of my latest, for example, made me the greatest compliment when he said that I captured the soul/the feeling of that place.

It’s really a skill I learned when I wrote campaigns for roleplaying games, especially those in contemporary settings. I read travel guides, for example, and tried to make the setting unique and special – what is going on, how is a place changing, and what do people live of? A logging town in the USA is very different from a Spanish resort town to an English college town. So right from the start, Lori and I really focused on making Bluewater Bay quirky and imbue it with character on its own.

EPIC Award winner and Lambda Award finalist Aleksandr Voinov is an emigrant German author living near London, where he works as a financial editor. His genres range from science fiction and fantasy to thriller, historical, contemporary, thriller, and erotica. His books were/are published by Random House Germany, Samhain Publishing, Riptide Publishing and others.

If he isn't writing, he studies sports massage, explores historical sites, and meets other writers. He single-handedly sustains three London bookstores with his ever-changing research projects. His current interests include special forces operations during World War II, the history of chess, european magical traditions, and how to destroy the world and plunge it into a nuclear winter without having the benefit of nuclear weapons.


L.A. Witt is an abnormal M/M romance writer currently living in the glamorous and ultra-futuristic metropolis of Omaha, Nebraska, with her husband, two cats, and a disembodied penguin brain that communicates with her telepathically. In addition to writing smut and disturbing the locals, L.A. is said to be working with the US government to perfect a genetic modification that will allow humans to survive indefinitely on Corn Pops and beef jerky. This is all a cover, though, as her primary leisure activity is hunting down her arch nemesis, erotica author Lauren Gallagher, who is also said to be lurking somewhere in Omaha.

L. A.’s backlist is available on her website, and updates (as well as random thoughts and the odd snarky comment) can be found on her Twitter (@GallagherWitt).

Every comment on this blog tour enters you in a drawing for a choice of one eBook off each of our backlists (excluding Lone Wolf) and a $10 Riptide Publishing store credit. Entries close at midnight, Eastern time, on December 28th, and winners will be announced on December 29th. Contest is NOT restricted to U.S. entries.