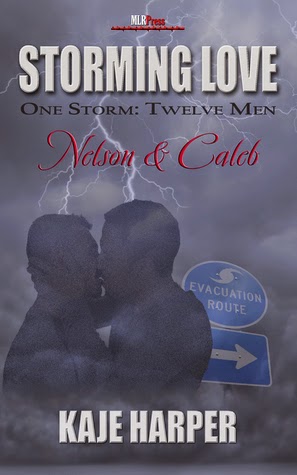 Nelson Dunn has a settled routine - an evening security-guard job, days off for his therapy dogs, occasional club sex, and good books. He sometimes dreams about more, but he's made himself content. So when Hurricane Lauris strands Caleb Robertson at his house, Nelson has mixed feelings about having an attractive guy in his space. Especially when nothing more can possibly happen.

Caleb went to the hospital to get the cast off his broken foot. Instead, he finds himself waiting out the storm with Nelson, his three dogs, and a very wet cat. It's less of a hardship than he'd have expected.

I've read 700+ M/M books, so nothing shocks me anymore, but this story did. It was not at all what I expected, and it made me question the conventions I take for granted in romance novels.

There are no villains and no heroes in this story, no manufactured drama or undue angst. Nelson and Caleb are ordinary guys.

Nelson is a former cop now working as a security guard with three dog babies and a volunteer position in the children's ward at a local hospital. He brings his rescue dogs with him to cheer up the kids.

Caleb works in the building where Nelson is a security guard. Caleb is average. He does something with science. His hair is a mess, and at the time of the story he has a cast on one leg and a little motorized scooter for getting around.

The guys have to weather out the storm in Nelson's house with three dogs and a stray cat for company. Caleb is really into Nelson's "big bear" looks, but Nelson is prickly, defensive, standoffish. He has some serious insecurities about his body.

Nelson and Caleb are a little awkward together. The conversation doesn't flow. Caleb wants to pass the time fucking and playing, but Nelson only seems interested in giving Caleb quickie blow jobs; he doesn't want Caleb to touch him.


I was irritated with this until I realized, Hey, this is REAL. Many relationships start like this, and some don't start at all. Candlelight isn't always romantic. People don't always match up sexually. And sometimes there's just nothing to talk about.

Even as I was thinking this was going to be another "I only do one-offs" kind of story, Harper shook me out of my reverie. Nelson's revelation made me profoundly sad...and then it pissed me off. Because who the hell wants to read about THAT in a romance book?

I'm not proud of my reaction. Shame on me.

There's nothing preachy about this book, nothing dramatic, but the little twist is unexpected, and it made me question just how much I want to be spoon-fed perfection.

Kaje Harper twists the genre, forcing readers to reevaluate how they perceive sex, looks, and relationships. It's actually quite brilliant.

There's no sparkly HEA here, but there is a sense of...healing maybe? Hope? I'm not sure. I do know that this story made me THINK and shook me up emotionally.

Thank you, Kaje, for that.

Download links are provided as a courtesy and do not constitute an endorsement of or affiliation with the book, author, publisher, or website(s) listed.