Please extend a warm welcome to Jamie Lynn Miller, who's joining us today with a guest post.


The floor is yours, Jamie.

Many thanks to Sandra for having me here today – the next stop on my GRL 2014 blog tour! Keep reading to find out how you can win an Amazon gift card!

I'm Jamie Lynn Miller and I'd like to talk about my novella Darkness Falls.

Why do we hurt the ones we love?

I’ve been asking myself that question since I was old enough to read my first Hardy Boys book. Joe was my favorite character and all of my favorite stories had him hurt or kidnapped or in some sort of danger. Eventually that carried over to TV shows, too, when I was a kid. Like “Emergency” – Roy was my favorite and if he was in peril I loved it. Then there was “Starsky and Hutch”. If Hutch was suffering I was loving it. Whenever my "hero" was hurt or in jeopardy and his friend/partner was there to put him back together again I was in my happy place.

This continued on into my teens and young adulthood and I truly thought there was something wrong with me! Why did I like it when my favorite characters were in pain? I felt like I was in need of a 12 step program or something!

Then in my early twenties I discovered fanfic. More importantly, I discovered HURT/COMFORT fanfic. It was like the heavens opened up, and a great light shined down upon me. I wasn’t strange for wanting my favorite characters to get shot or poisoned! There was a whole ton of people just like me! I can’t tell you what a relief it was. :-) And that was the catalyst for me to actually start writing my own stories.

Now I embrace my love of hurt/comfort. It’s a running theme in my eBooks, and Darkness Falls is no exception. What would you do if you were suddenly robbed of your sight? How would you cope? Would you withdraw into yourself and from life? Or would you reach out for a helping hand, for someone you could lean on to help you through this life-altering event?

Here it is, the story of Matthew and Daniel and how they overcame the darkness to find their way to one another. I hope you enjoy reading it as much as I enjoyed writing it. 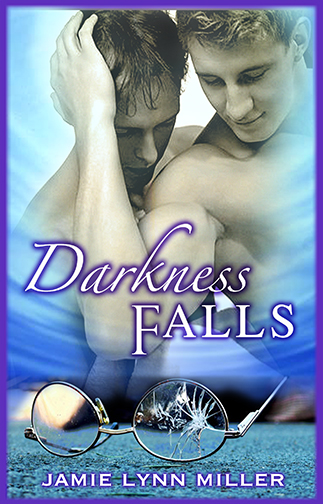 Matthew Tucker is a successful actor on a hit television show, his career on the rise. Life is good. What more could he want? Daniel Westman, that’s what – his co-star and close friend.

Matthew’s attraction to Daniel grows day by day, feeling there’s something between them, just under the surface. But months go by, with Matthew afraid to tell Daniel he was falling in love with him. Because if he was wrong and Matthew was looking too deeply into it…he’d lose his best friend. So instead Matthew longs for Daniel in silence, until an accident on set may leave Daniel permanently blind. With his friend hurt, scared and confused, his life possibly forever altered, Matthew never wavers from Daniel’s side, no matter how difficult it gets.

His dedication brings them closer than ever before, but is it possible to find happiness, and love, in the wake of a tragedy? Or has Matthew’s hesitation cost him that chance and he’ll lose Daniel to the darkness instead?

The words were out of his mouth before he could stop them. “You want me to give you a shave?”

Daniel’s hand dropped away from his face and Matthew was horrified that he’d maybe overstepped the bounds of friendship. Shaving another guy was kinda…personal. But Daniel nodded slowly and Matthew blew out a relieved breath.

“Yeah, man, I’d appreciate it,” Daniel replied. “And I hope you know that you’re the only person I’d trust putting a razor to my throat,” he continued.

Daniel said the words lightly, but Matthew could also hear the underlying seriousness in what he said, and it warmed him.

Daniel’s reply was showing Matthew his middle finger as he stood up from the table and made his way out of the kitchen.

A quick stop in Daniel’s room to get him fresh clothes and then the two men were walking into the bathroom, closing the door behind them. The bath was nearly halfway full by now, warm steam beginning to fill the air.

As Daniel took off his t-shirt, Matthew retrieved his friend’s razor and shaving cream from the medicine cabinet, then a washcloth and hand towel.

Matthew glanced around the room. “Here, why don’t I sit on the counter between the sinks and you can stand in front of me?”

Daniel nodded his agreement and Matthew hopped up on the counter. He reached out and took his friend by his wrist, pulling him closer, guiding him to stand between Matthew’s widespread legs.

Matthew took a second, and a breath, as his heart jumped a bit, having Daniel so close, naked from the waist up. He closed his legs, until they were just barely brushing Daniel’s, and he felt as if that drew Daniel even closer to him. Matthew swallowed, reluctant to release Daniel’s wrist, the skin of it so warm under his fingers.

Daniel’s quiet question broke Matthew out of the moment and he blinked, letting go of his friend’s arm.

“Umm, yeah, sorry,” Matthew stammered, and he turned his upper body toward the sink on his right, twisting on the taps. He adjusted the temperature just this side of too hot and soaked the washcloth, before handing it to Daniel.

Daniel wet down his face and neck with the cloth as Matthew first pulled up the stopper in the sink, then flipped open the cap on the shaving cream.

Face thoroughly damp, Daniel handed the washcloth back to Matthew, who laid it next to him on the counter, then turned off the taps on the sink. He squirted a small amount of shaving cream onto the fingers of his right hand, set the can down and rubbed the cream onto his left hand as well.

Reaching out, he slowly smoothed the cream onto Daniel’s face – under his cheekbones, above his upper lip, across and back on the sides of his face, over and under his chin, then a short way down his neck. He felt Daniel release a small sigh and saw his shoulders relax.

The water running in the bathtub was the only sound in the room as Matthew picked up the razor and began carefully shaving his friend. A slow swipe down, a rinse in the sink…repeat…repeat…repeat. It was sensual, almost hypnotic, as more and more of Daniel’s skin was revealed with each pass of the razor.

Matthew felt Daniel’s hand touch his leg, slide up, until his palm was resting high up on his thigh. Matthew breathed in at the touch, breathed in the warm steam enveloping them, felt his legs close a fraction more.

One last pass with the razor and Matthew was finished, Daniel’s skin pink and smooth once more. Eyes never leaving Daniel’s face, Matthew set the razor down on the counter. There was a spot of shaving cream on Daniel’s left cheekbone and Matthew reached up, palm resting against the side of his friend’s face, fingers curling around behind Daniel’s ear, his thumb sliding over Daniel’s cheek, clearing the shaving cream away.

Time seemed to freeze, catching the two men in the moment as Matthew felt his chest tighten, his heart pound, and he couldn’t breathe, felt lightheaded.

This is why he left his three-year relationship with his boyfriend Colin nearly four months ago. When he no longer got this feeling being around him, but around his best friend instead.

When he realized he was falling in love with Daniel.

His thumb caressed Daniel’s cheek again and Matthew desperately wished that he could see Daniel’s eyes, to see what he was feeling. God, was he alone in this madness? He needed to know…

Matthew felt Daniel sway towards him, his waist pressing against Matthew’s groin, his fingers flexing on Matthew’s thigh, and Matthew’s throat went dry.

Jamie Lynn Miller has been writing fiction since childhood and decided to take the plunge and go pro in 2008, finding to her amazement that people truly enjoyed her love stories. She’s a romantic at heart, and her tales reflect the desire we all have to find “the one,” persevering through trials and heartache for that happy ending.

Jamie has a degree in fine arts and has spent the last twenty years working as a graphic designer, though she’d much rather be writing. She was born in Chicago and still lives there today with her husband and their two furry, four-footed children, er… cats. If she’s not brainstorming story ideas, you can find Jamie at a sci-fi convention, in front of a furnace doing glass blowing, or on a mat twisted into a yoga pose.

To win a $10.00 Amazon gift card, leave a comment here (and your email address) with the answer to the following question: “What is Matthew’s ex-boyfriend’s name?”

Thanks for joining us today, Jamie. To all our readers, good luck in the contest, and, until next time, happy reading.