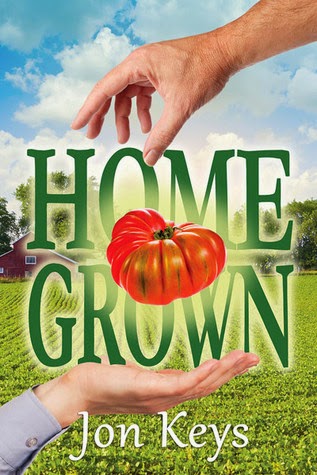 Peter Stevens believes nothing tastes better than a vine-ripened tomato tended by a farmer’s hands. The craving for heirloom tomatoes leads him to his local farmers’ market and his favorite vendor, Ethan Hart. As Peter becomes a regular customer, the two find they have more in common than a love of good food. Just as Ethan begins to relax, Peter's ex, Jay, appears and is all the things Ethan is not. A perfect storm of mistakes and poor choices has him ready to admit defeat. With the guidance of friends and a goat far too smart for her own good, Ethan realizes he needs to have a tender hand and patience to grow a home for Peter.

This book was like a soup that should have been excellent, but the ingredients didn't quite work together.

Ethan and Peter meet at a farmers' market in Wisconsin where Ethan sells his small-farm-grown tomatoes and other produce. Ethan is a farmer, Peter a city-slicker. This is apparently very important, because it's the crux of the tension in the story.

Ethan had a semi-abusive asshole of a boyfriend at age 18, and, ten years later, he's still not over it. Peter had an asshole of a boyfriend too, and unfortunately Peter's asshole ex somehow finds his way to Ethan's farm. Peter's ex knows Peter's "secrets" and is determined to tell Ethan to break up the two men.


The MCs cook together and discuss food and meal preparation a lot. They talk like they're 60 but act like they're 16. Ethan shies away from commitment and touch. Peter is scared for Ethan to know his deep, dark secret, which is, by the way, completely mundane.

Not much really happens in the story. The chemistry and attraction between the MCs felt forced. There was little steam, and what there was felt wooden and flat. The secondary characters weren't particularly well developed. There was a kid who was supposed to be a preschooler but talked like he was 18 and on crack.

There were some cute moments between the MCs at the farmers' market, and Ethan's goat, Bessie, stole the show in a couple scenes. The writing was slightly over-embellished and artificial for my tastes, but there were no blatant typos or errors. It was a short and easy story to read, but quite forgettable.