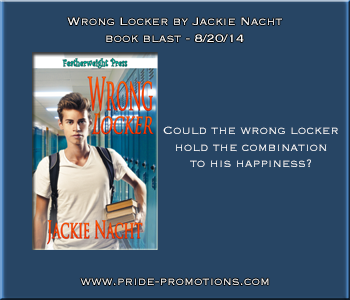 Welcome to the Book Blast for Jackie Nacht's book 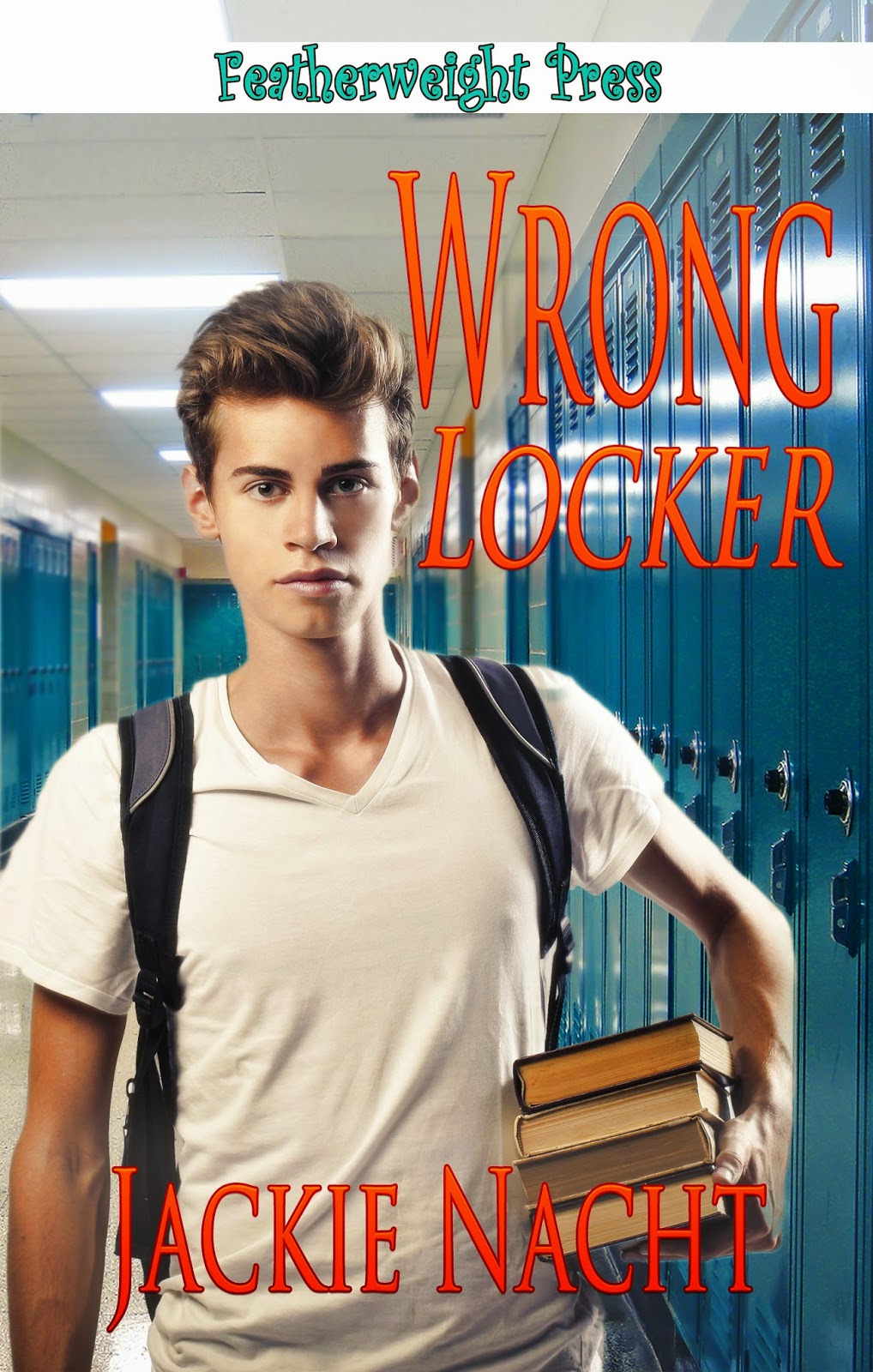 Sometimes the best way to turn your bad luck around, is reach out for the hand willing to help.

Sophomore Shaun Richards could not have any worse luck. The front office ended up placing his locker in the senior wing this year. A month into the year and it hasn't gotten any better. A group of seniors make it their mission to prove that he doesn't belong and gives him a hard time on a daily basis.

While eating lunch alone one day senior, Nash Wilder comes to sit with him. Shaun has had a crush on the senior all year and wonders what the heck the senior was doing sitting with the geeky underclassman?


I was in pure hell. As I stood in front of Northeastern High, I could already feel my body tremble in panic. I was barely able to swallow, my throat dry with fear. Scrubbing a hand over my face, I wiped away the stray beads of sweat that showcased my anxiety to everyone passing me by.

Why was I so afraid to walk through those double doors? Oh that's right. The front office had assigned me a locker in the senior hallway this year due to overcrowding. A sophomore in the senior wing? What in the world had they been thinking?

"You get up late, Shaun? Do you need me to start calling you in the morning again?" Wade adjusted his backpack as he came to stand next to me.

Wade was my only friend in school. We had grown up together and were tight as they came. He was protective of me and vice versa. He was also the only one I'd ever told I was gay, outside of my mom, even though I was teased ruthlessly by the jerks who just assumed. I wasn't hiding it, but it was no one's business either, so I didn't confirm or deny.

How could I tell Wade that every day I tried to be this late? That way I might avoid having to walk to my locker in a hall crowded full of jerks that made it their life's mission to put me through hell on a daily basis. If I came in late enough, I would only have to deal with a few stragglers as opposed to the whole gamut.

"No, I'm good, Wade." My voice quivered. I hated feeling this way.

We entered the school together, and Wade paused at the front of the sophomore wing, pursing his lips. "Do you want me to go with you?"

As much as I wanted to say yes, I knew these jerks would be horrible to Wade, and I wanted to protect my one and only friend. "Go on to your locker. We only have a few minutes to make it to class."

Walking away from Wade was a test of my courage. My whole body started to go on lockdown, ready to be verbally attacked, insulted and made to feel like a piece of chewing gum on the bottom of a shoe.

Putting my head down, I turned the corner, heading for my locker. I learned that if I didn't make eye contact with the seniors, usually they would ignore me. I prayed that this would be one of those days. Getting to my locker, my fingers trembled as I grabbed my lock. Sheesh, I couldn't even get the combination in I was shaking so badly. After screwing it up once, I had to try - spinning the combination out and trying again.

I took too long. The presence behind me confirmed that my day of hell was about to begin. Leaning my forehead against the cool locker, I didn't even bother to try opening it up as my breath quickened.

A fist slammed next to me, causing me to jump.

Blake was there, leaning against the locker next to me with two of his buddies standing next to him. I have no clue what I ever did to offend the guy, but he hated me with a passion and was the ringleader to a group of seniors that gave me hell on a daily basis.

"Why haven't you left yet? No one wants you here, fag." Blake all but sneered at me.

It was the same thing every day. A sophomore wasn't wanted in the wing, but it was more than that. This guy hated me. And I absolutely loathed being called a fag. That was just as bad as a slap to the face. Worse.

There was no point in responding. I'd tried the first couple times, explaining administration couldn't switch my locker and that the sophomore wing was on overflow to other wings. Heck, there were a few more sophomores in this wing too, but they didn't seem to have half as much trouble as I did. Of course, those sophomores were athletes.

Me, I was more on the small side, skinny as they came with stylish brown hair that I used to love but now seemed to be a beacon for these jerks.

"I don't want to see you anymore. I don't care how you do it, but I don't want you walking in this hallway again." Blake slammed the locker with his fist again. The three walked away, laughing and jeering at my humiliation.

I had hoped that it would get better, that these guys would get bored and leave me alone. Yeah, they hadn't physically hurt me, yet. I knew that it was only a matter of time. Things had escalated too quickly in the last month since I had started school.

The bell rang, and I groaned, knowing that I was going to get into trouble for another tardy. Some days it just didn't pay to wake up.

I ran all the way to my classroom and got a stern look from my Spanish teacher before sitting down in my assigned seat. This was the best part of my day. While one group of seniors were jerks, they weren't all bad. Spanish was an elective that students were required to take two years of. Most waited until the last two years but I knew that I wanted to minor it in college so I wanted to have four years of languages.

This period, I got to stare at the back of the football co-captain, Nash Wilder. The man was gorgeous with sun-streaked light brown hair that had a short messy style to it. He was filled out -

with muscles that I would forever lack and a tan I wish I could achieve. However, in my paleness, all I could hope for was a third degree burn. The man was handsome and unattainable. It seemed every girl dreamed he would ask them out, but the guy remained oblivious, concentrating on sports and school.

Glancing up at the dry erase board, I began doing my silent work of conjugating verbs and putting them into sentences. The tension in my body was still there from my earlier confrontation, but a small amount slipped away, knowing that I would have at least a small reprieve.

I was just about finished when Nash turned and stared at me. I glanced up from my paperwork into his puppy dog chocolate-brown eyes, surrounded by long dark eyelashes.

My jaw threatened to drop as he just scrutinized me. What was he thinking? Did I have something on my face? Oh God I did, didn't I?

"You okay, Shaun?" Nash whispered, doing a quick glance over his shoulder to make sure the teacher wasn't looking.

Nash knew my name? He freakin' knew my name. I didn't think anybody as popular as him would ever notice someone like me, unpopular and not an athletic bone in my body. He also sounded concerned. About me?

Someone in Nash's social stratosphere didn't want to hear about all my problems. Probably would bore the guy to death.

Nash stared at me for a moment more before he went back to his work. I blew out a breath with relief that I didn't have to discuss the jerks that constantly harassed me. How embarrassing would it be to admit to Nash the extent of my struggles, while crowded hallways seemed to simply part for him as he strolled along?

Rolling my pencil between my fingers, I frowned down at my work. This year was going to be so long for me. How was I ever going to be able to get through it? Sighing, I decided to try not to think about it as I got back to my work. Maybe in time I would have an answer, but right then, all I wanted was to survive the day.

Short, sexy and sweet— where a little love goes a long way.

That’s the best way to describe Jackie Nacht’s stories. She was introduced to M/M Romance through her sister, Stephani, and read it for years. Then, she thought it was time to put her own stories on paper. Jackie began writing short and sweet stories that ended with a happily ever after.

Thinking back to her own book addiction, where there were many nights Jackie stayed up way too late so she could read just one more chapter— yeah, right— Jackie decided to write short romances for young adults as well as adults. Hopefully, they will give high school and college students, or working men and women something they can read during their lunch hour, in between classes or just when they want to briefly get away from the daily stresses of everyday life.