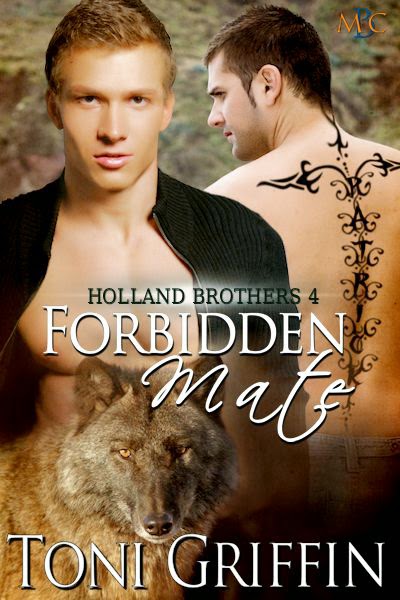 Finding his mate should have been Patrick Holland's greatest day, instead it turned into a nightmare with one phone call. His mate didn't want him. His heart broke, but at sixteen he was too young to do anything. The next ten years—ten long years— of Patrick's life are spent at odds with his mate. Split by forces he can't comprehend and a long line of misunderstandings, Patrick doubts he'll ever get the man he's both loved and hated.
Jake Richmond never expected to come home from Uni to find the youngest Holland brother was his mate. Knowing the news might uplift his still grieving father, Jake shares the news only to have his young mate threatened. Jake does the only thing he can think of, protect Patrick. The next ten years are nothing but torture for Jake as he watches his mate grow into a remarkable young man.

They say time heals all wounds, but how much time?


Jake got in his car and drove to the pack running grounds. He had excess energy to burn, and his wolf was demanding to be let out. His was the only car in the car park as he pulled up and got out. Jake stripped where he was, as there was no one else around, and walked into the bush. He shifted, then ran. Several hours later, his thoughts were still stuck on the fact that Patrick Holland was his mate, his very young and inexperienced mate.

The idea of being Patrick's only lover brought forth a howl of possessiveness. He loved the fact that no other man would ever get the opportunity to touch his mate. Now that he knew exactly who Patrick was to him, it was going to kill Jake not to be near him. Jake had to talk to his father and let him know he'd found his mate, even if he couldn't claim Patrick yet.

Exhausted after his run, Jake took his time making his way back to his dad's house.

His mum had died several years before, which had just left Jake and his dad. Jake had never been especially close to his dad, his mum being the one that had held the family together. His parents had been a mated pair. Jake knew his father had loved his mother deeply, they had been very happy together.

Jake unlocked the door and made his way through the house to his old room. He didn't see the point of having his own place when he was only here for a couple of weeks. He was thankful now that he was staying with his father, even if they didn't get along great, because if he had his own space, the temptation to have Patrick with him would be great.

He stripped his clothes once again and headed for the bathroom. Jake stopped to look in the mirror. He knew it was silly, but if Patrick liked him with stubble, then he would keep it. He would have to buy a shaver to keep it to the length he wanted as he didn't want to be sporting a full beard. That look wouldn't suit him at all, he didn't think. Turning the water on to heat up, Jake palmed his still hard cock and watched as a bead of precum appeared at the tip. Jake stepped into the water and hissed as the hard spray hit his aching shaft. Now he could finally do something about it.

He grabbed the conditioner from the shelf and squirted a generous amount in his hand, then wrapped his fist around his dick and squeezed hard. Jake moaned as lightning bolts of arousal shot through his body. His thoughts were firmly back on Patrick wrapped around his body as their mouths met in a spine-melting kiss.

Once Jake was sure he could stand without his legs giving way, he quickly washed his body and stepped out of the shower. He dried himself, then made his way back to his room. Jake collapsed facedown on his bed and succumbed to the exhaustion that swept through his body.

Jake startled awake several hours later as the front door slammed shut. His dad was home, and it didn't sound like he was in a good mood. Every time Jake came home from school, his father had more and more mood swings. Jake wondered how his father would take the news that he had a male mate.

He hoped the news would bring his father some joy; after all, the man knew exactly what it was like to be mated. It might be a bit of a shock who Jake's mate was, however, Alex had come out several years ago and his dad had told him to each his own. This gave Jake hope his father would be fine with his own sexuality. He had never really thought about coming out himself as Jake enjoyed a well-rounded sex life.

Patrick had agreed not to mention their mating to anyone, but Jake wanted to ask his father to keep an eye on his mate until he could finish uni and get back here permanently.

Jake dressed in silence and made his way down the hall, looking for his dad.

He found him in the living room sitting in his favourite chair watching the news. "Hey, Dad, bad day at the office?" "Yeah, you could say that. Pizza for dinner okay?" Arthur Richmond was a large man, with thick black hair and wide shoulders. He had sharp cheekbones, and his five o'clock shadow was as dark as the hair on his head. He was also one of the more powerful wolves in their pack.

"That's fine, you want me to order?" Jake took the nod as assent and went to get the phone. He placed their order for pizza and then joined his father. He wanted to give his dad time to relax, so Jake decided to wait until after they'd eaten to bring up his new discovery.

Jake watched the television with his dad until the doorbell rang. He paid for their dinner, grabbed a couple of plates and went back to the living room. They ate in silence until the entire pizza was gone.

Once Jake was sure his dad had relaxed enough, he gathered his courage and turned to face his father. "Dad, can we talk?"

His father muted the television before he adjusted his position in his seat to face Jake. They were catty-corner to each other with Jake sitting on the couch. "How's school going?" About the only thing his father was proud of Jake for was becoming a lawyer.

"Fine, Dad, school's good. It's a lot of information to take in, but I'm doing well." Jake looked his father in the eye. "That's not what I want to talk to you about, though." He really hoped this went well. Jake wanted to be able to ask his father to keep an eye on Patrick when he had to go back to classes.

His dad looked a little shocked, but his expression still showed love and acceptance of whatever Jake wanted to talk about. "Okay, then, what is it?"

His dad's expression showed nothing but joy. "That's great! Where is she? Why didn't you bring her home with you?" He was looking around as if he expected someone else to walk out from around a corner.

Jake winced at his dad's assumption about the sex of his mate. "It's a little more complicated than that, Dad."

"What's complicated? You claim her and bring her home to meet me."

"Dad, my mate is Patrick Holland, and he's only sixteen. That's why it's complicated." Jake watched as the love and joy on his father's face changed instantly to anger and hatred. Jake was startled at his father's expression.

"Dad?" he queried when his father had failed to say anything for a minute or two.

"Your mate is who?" his dad screamed at him. Jake sat there shocked, not only at the sudden burst of sound in the quiet room, but also the vehemence he heard in his dad's voice, a sound he'd never thought to hear from the man who had raised him.

"Patrick Holland, the Alpha's youngest son." Jake hoped that the mention of their Alpha might calm his father down, but he was mistaken.

Arthur Richmond seemed to get even angrier. "I forbid you to claim him!" his father roared as he leapt to his feet. Shock coursed through Jake's body as he jerked back quickly. God, he hoped he had misunderstood what his father had said. "Dad, Patrick's only sixteen. I've already told him I won't claim him, at least until after I finish school."

All Jake's hopes died when his father's next words registered. "I don't care how old the kid is," his father answered, practically biting off each word through clenched teeth. "You. Are. Not. Going. To. Claim. Him! I. Forbid. It.”

Toni Griffin lives in Darwin, the smallest of Australia’s capital cities. Born and raised in the state, she’s a Territorian through and through. Growing up Toni hated English with a passion (as her editors can probably attest to) and found her strength lies with numbers. Now, though, she loves escaping to the worlds she creates and hopes to continue to do so for many years to come. She’s a single mother of one and works full time. When she’s not writing you can just about guarantee that she will be reading one of the many MM authors she loves.