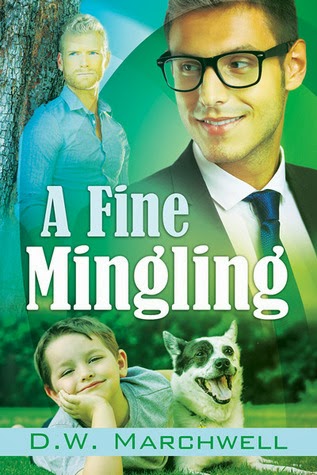 Benjamin “Big Ben” Forrester came from a wealthy family, went to the right schools, and had handsome men falling at his feet. But all Ben has ever wanted is a man to love him unconditionally. Being a firefighter won’t bring Ben fame or riches, so where will he find true love and acceptance?

Alistair McInnis lives with his older sister, Abigail, and her deaf son, Jared. Alistair left his job as an editor to take care of his nephew when Abigail divorced and enrolled in law school to provide a better future for Jared. But Abigail is falling in love with the policeman next door, and Jared won’t need Alistair forever.

While working with the station house to oversee the rebuilding of a play castle burned down by vandals, Ben meets and falls for Alistair. Can Ben learn what it means to be accepted for who he is? Can Alistair accept that life comes with no guarantees? They soon find happiness is a fine mingling of hanging on and letting go.

"Mundane" might be a word that best describes this book.

Alistair and Ben meet, start dating, and fall in love. Ben is a fireman. Alistair is a freelance editor and full-time uncle/father/mentor/protector to his 5-year-old nephew, Jared. Alistair is the parent who follows his child around sanitizing everything the child touches and carrying the kid around, even though Jared's FIVE, not two, and perfectly capable of walking. I think this was meant to show how loving Alistair was, but it was just obnoxious. I get that Jared is deaf, and so Alistair is extra protective, and Jared is a sweet kid. But I still wanted to shake Alistair and say, Enough already; go live your own life.

Abigail, Alistair's sister, is busy with law school, so Alistair is the main childcare provider and lives in her basement. No, just no; a grown man should never live in his sister's basement. Alistair really should have allowed Abigail to take on more responsibility for her own child.

But, hey, that's not an issue for Ben, because Ben is practically Jesus. All Ben wants is a family, people. How great is that?

There was ZERO chemistry between Ben and Alistair. There was one steamy scenes, which had potential, but everything else was fade to black. The two MCs talked like college roommates, and Ben's interactions with his mentor/friend Frank at the station were silly and immature.

There was a side plot involving Abigail dating the policeman next door and a confrontation between Ben and a fat fireman who says something rude to Jared and Alistair, but big issues were raised and never developed. Where does Abigail end up doing her internship? What about the big decision Abigail makes regarding Jared?

Even the rebuilding of the castle playground, which is the reason Ben and Alistair meet, and which is in the damn blurb, is just an aside. There's bits about Alistair's ex and Ben's strained relationship with his parents, but none of it is developed in a meaningful way.

The book actually ends on a question with no answer!

So, yeah, I was underwhelmed. The writing was fine, even if some of the dialogue was stilted and awkward. But there was no particular tension or slow burn between the MCs. There were so many times when Ben went to caress or kiss Alistair, and Alistair would pull away and tell Ben he was being incorrigible. Or they would have a conversation about "going slow." Oh, hell, you're grown men, just fuck, already.

Buy/preorder links are provided as a courtesy and do not constitute an endorsement of or affiliation with the book, author, or publisher listed.
Posted by Dani(ela) at 12:00 PM