Men of Manhattan
Reviews for
Books 1 through 3 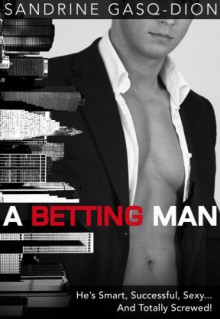 How bad could one harmless bet be? Kent Samson is about to find out. Raised in Alabama, Kent has hidden his past and now loves his life as a big time ad exec for a prestigious advertising company in New York. But when he makes a bet with his best friend, Blaine, Kent is thrown for a loop—for Kent has to make the next person to walk through the door fall in love with him.

Terry Barron is hiding out in New York. Raised in England in a wealthy family, Terry escapes to New York to avoid arranged marriages and the lifestyle he’s grown to hate. When he delivers a package to an advertising firm, he meets the unbelievably sexy Kent Samson. Suddenly, secrets and lies complicate everything and both men find themselves in uncharted waters. How will Terry feel when Kent is revealed as a betting man?

Kent Samson has escaped his Southern upbringing and forged a glamorous life for himself as an advertisiting exec in Manhattan. A ladies' man, he has a different woman on his arm and in his bed frequently, but deep inside he feels lonely.

A bet with his best friend and colleague Blaine has him agreeing to make the next person to walk through his office door fall in love with him.

That person turns out to be Terry Barron, a bike messenger delivering a package.

Operation Seduce Terry begins, but somewhere along the way, Kent finds himself falling for the unassuming young man. A relationship build on secrets and lies is doomed from the start, and both Terry and Kent find out the hard way.

What I loved about this book is the easy banter once Terry gets past his misconceptions about Kent, and how well these two men fit together. Kent quickly forgets about the bet, falling hard and fast, and even takes Terry to meet his folks down south. The way he treated Terry endeared me to Kent, and I almost forgave him for following through on the bet. He convinced me that he had real feelings for Terry.

Of course, I was waiting for the secret to come out, and when it did and Terry flees back to England, I would have very much liked to wring Blaine's neck. I also raged at Kent for forgiving his friend so quickly. I wouldn't have. Blabbing about it was done maliciously and with intent. Yeah, yeah, Blaine helped after the fact, but Dude, not cool. Not cool at all.

I really liked Terry too, even if he also kept a secret from Kent, though I agreed with him about it not hurting Kent directly. Then again, that was a really big secret, so the two should have come clean at some point before they hopped into bed. Speaking of bedding, holy wow, super hot boysecks, Batman!

At novella size, this was a quick read, but perfect for a poolside afternoon, sipping a cold Margarita. Recommended!

It’s been almost a year since a disastrous bet dropped Blaine McKlintock and his best friend, Kent Samson in hot water. Now, Kent is getting ready to propose to Terry Barron. Blaine couldn’t be happier for his best friend, but when Kent asks Blaine to plan the wedding, Blaine is thrown for a loop, especially when Kent drops another bomb. Spencer Cassidy will be helping. Blaine remembers Spencer very well, but the former Wall Street force doesn’t seem to remember him. Blaine’s changed a lot since the bet, but will Spencer see it too?

You remember Blaine and Spencer from the first book, with Blaine being Kent's best friend/instigator of the bet and Spencer being Terry's boss at the Bike Messenger company. You might also remember the dressing down Spencer gave Blaine toward the end of the first book, when a sheepish and desperate Kent contacts Spencer to find Terry.

So, with that in mind, you can imagine that Spencer doesn't have the best opinion of Blaine. But Blaine remembers Spencer from his days on the NYSE floor, when he was in college and visiting with his high powered father. Spencer doesn't remember, but Blaine has dreamed about Spencer for years.

He's also no longer the pompous ass you might remember from the first book. Kent and Terry's love story, and his involvement in the almost-derailment, have changed Blaine. Now he just longs to find someone who will look at him like Kent looks at Terry.

This was just as cute and fluffy as the first one. The author manages to give her characters distinct voices, but also shows that they fit well together, even as Blaine finds out more about Spencer. Theirs isn't an easy romance, but it's a romance nonetheless.

Another perfect novella for poolside reading or curling up in your favorite chair. Recommended!

Army Ranger Slater Cassidy has a very special – very sexy – target in his sights. Meeting gorgeous, smart, uber-snarky Casper Kennedy was the highlight of Slater’s last trip home to New York. The soldier in him carefully plans his conquest. Unfortunately, Casper’s wearing some seriously strong armor and Slater’s charm offensives bounce right off. Casper’s refusal to fall for him is puzzling – not to mention incredibly annoying. When Slater gets leave again after grueling back-to-back tours in Afghanistan, all he wants is another shot at wooing Casper. He jumps right into the battle for the other man’s heart, but Casper does not intend to entertain the troops. A heartbreaking revelation changes the rules of romantic warfare, and Slater suddenly realizes he doesn’t just want Casper. He wants to capture his heart, too.

Casper Kennedy is fighting a losing battle. A certain outrageously demonstrative Army Ranger has been a thorn in his side since his last trip home – and the main character in his steamiest dreams. Now he’s back. He launches an all-out sensual assault and no matter how hard Casper pushes Slater away, the man somehow manages to inch closer. So close, in fact, that Casper’s once-impenetrable defenses are in danger of collapsing. Should he throw up the white flag and take a chance at love? Or start firing back and keep his heart protected? When the handsome Ranger shows his true colors, Casper just might have to surrender the fight.

This was my least favorite of the three books in this series, and I'll tell you why further down. I loved the snarky dialogue between Casper and Slater, and I loved their budding relationship. I loved how Slater was relentless in his pursuit of Casper, how he kept trying to get the man to trust him and open up to him, and how he got Casper to fall in love with him. Holy hot boysecks included.

Until that thing happens, and Slater undergoes a complete personality transformation.

Yeah, I know - this stuff does happen. It was textbook PTSD, combined with anger and pain, and he lashed out at the one person he promised not to hurt.

It's unfortunate that the book didn't delve deeply enough into the issues it raised. In some spots, it made me angry because it was just brushing them under the carpet, instead of addressing them with sensitivity and care.

It felt rushed and careless, and while Casper and Slater get their happy ending, it almost felt as if they didn't have to fight hard enough for it. I cheered for them anyway.

Bottom line is that this book wasn't long and deep enough to qualify as a real hurt/comfort soldier love story. It had the elements of one, that much is true, but it didn't really bring across the realistic struggles of PTSD and war injuries.

I loved that the characters from the previous books got to make an appearance again, and I would like to see an installment of this series that focuses on Ramos, if possible. And then show what it's really like to lose your legs and live with survivor guilt, combined with the trauma from seeing your buddies die.

As far as the romance goes, it was believable for the most part, even the ending the author gave her characters, whether they deserved it or not. I liked that both Slater and Casper had to do some soul-searching on their own to figure things out.

While this is part of a series, it can be read as as standalone, which is always good.

** I received a free ARC from the publisher. A positive review was not promised in return. **