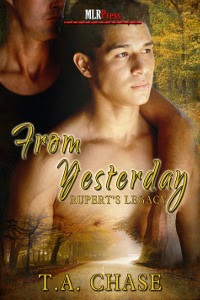 Philip must decide whether his memories of the past will keep him from love in the present.

Philip McBride is fresh out of the Army and trying to figure out what he wants to do with his life. Before he can move on with his life, he needs to make peace with his past. Part of that past is his very first boyfriend who has died. Philip needs to talk to those were with him at the end, so he can ease his own guilt for not being there.

Carlos Mendoza meets Philip at Legacy House, where Carlos's brother is a resident. While he's dealing with the knowledge of his brother's impending death, Carlos is also coming to love Philip.

Will he be able to accept Philip's love without his brother there to support? Will Philip give up the past to make a new start with Carlos?

From Yesterday tackles the always difficult topic of HIV and AIDS, which is a health crisis even in the midst of powerful drug cocktails and medical advances. Modern medicine saves many, but it doesn't save everyone.

Phillip, newly discharged from the Army, visits Legacy House after learning it's where his first love, Joey, passed away. Legacy House is a nonprofit hospice facility for those in the last stages of AIDS who have nowhere else to go and no one to care for them. It's a place where Carlos's younger brother, Miguel, has come to die after being shunned by their father.

Phillip and Carlos meet as soon as Phillip arrives at Legacy House, and they lean on each other as Phillip comes to terms with Joey's passing and Carlos grieves the imminent death of his brother.

I'm not certain the reality of dying from something as brutal as AIDS was dealt with realistically here. It's not that the book sugarcoats the ugliness; it's that there isn't enough depth to garner true empathy.

That's the issue with the relationship between Phillip and Carlos as well. They help each other, and the ending is full of promise, but we don't see enough of them together to fully believe in their happy ever after. They go from meeting to love to "forever" in the blink of an eye, and since we're not privy to most of their interactions on page, the entire relationship feels a bit rushed. There's no slow burn and very little steam.

The dialogue was awkward and stilted, and not all loose ends were resolved; certain things were completely brushed aside (like Carlos coming out to his family or Phillip's military career, which was invisible and seemingly inconsequential). There were also a few typos and editing issues that affected my enjoyment of the story.

There were things I liked, including the overall lack of angst, Carlos's relationship with his brother Miguel, and Miguel's wonderful outlook on life, and I would like to revisit Carlos and Phillip and perhaps find out more about Paul (Carlos and Miguel's brother).


Thanks for visiting our blog, and happy reading!

Buy and preorder links are provided as a courtesy and do not constitute an endorsement of or affiliation with the book, author, or publisher listed.
Posted by Dani(ela) at 6:00 AM