ARC Review: The Only Guy (The Guy #2) by Skylar M.Cates 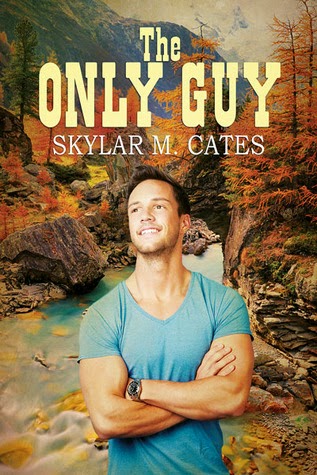 Aaron Weiss knows how to escape. Years ago, he ran from a romantic disappointment and impulsively joined the Army. Now, he’s forced to take a medical discharge and readjusting to life at home proves a challenge.

Jesse Ross knows how to hide. He realizes he’s an oddball, and that he’s an outsider within his own family. He also knows his secret love since childhood, Aaron, only wants his good-looking, favored older brother. Over the years, Jesse was a faithful pen pal to him. Still, he's shocked to his core to find Aaron on his doorstep.

As long-buried secrets and past hurts take center stage, the two are overwhelmingly drawn to each other. But it’s their future that may force them to risk everything.

The Only Guy was light, sweet, and easy. There was little angst here, but a lot of romance and tenderness, and quite a bit of steam.

I have a weakness for Jewish men, especially cute, gay ones. There’s no religion in this book, but Aaron and Jesse both come from well-to-do New York Jewish families, and Aaron’s friends even called him “The Rabbi” while he was in the army (he was the only Jewish guy around, but still).

Growing up together, Aaron and Jesse were like siblings. Aaron was six years older and treated Jesse like a little brother. It was Gregory, Jesse’s older brother, for whom Aaron pined. But for Jesse, Aaron was always the one and only

When Aaron returns home after a 10-year stint in the army due to a heart condition, he can’t wait to see Gregory, but it’s Jesse, a sculptor living on a little farm in the New Jersey mountains, who takes his breath away...eventually. At first, Jesse wants nothing to do with Aaron. Suffering from general anxiety, Jesse is a bit of a hermit and terrified of Aaron breaking his heart.

There is some family drama surrounding Jesse’s family and their dismissal of him and an incident regarding Aaron’s health that leaves Aaron scared, helpless, and pushing Jesse away, but, even so, this is not an angsty story. The focus is on the two MCs falling in love and starting to build a forever together.

Aaron and Jesse were respectful of each other, and the sex scenes were hot and emotional. I liked that neither man was perfect, but that they accepted each other, faults and all. They actually talked through issues and were open and honest with one another. That was so refreshing!

I was dreading having Aaron see Gregory again, worried that Aaron would be an idiot and go for Gregory instead of seeing what was right in front of him. But it didn’t work out that way at all. I was relieved, but I also think that having Gregory be a complex character dealing with insecurities that keep him in the closet would have made for a more interesting plot than portraying him as a one-dimensional jerkoff. It was almost too easy for Aaron to choose Jesse.

I have not read book 1, but this book completely worked as a standalone. Aaron and Jesse visit Arizona for the wedding of Pierce and Anthony (the MCs from book 1), and I liked seeing the ceremony, even not having read Pierce and Anthony’s back story.

How exactly the wedding came about in Arizona, where same-sex marriage is currently illegal, is something I don’t want to question. We can only hope that in a year it will be reality, not fiction.

Buy/preorder links are provided as a courtesy and do not constitute an endorsement of or affiliation with the book, author, or publisher listed.
Posted by Dani(ela) at 12:00 AM