Welcome to our stop for the

Anne Tenino is in the house and will share pictures from her research/vacation in the Provence.

First off, though, let's talk about the book. 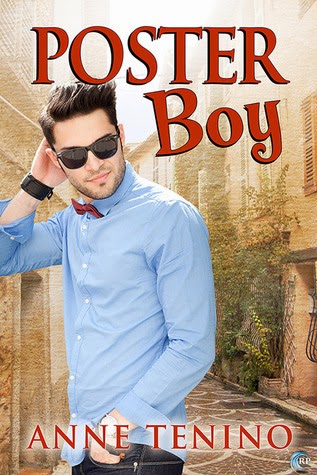 It's all fun and games until someone puts his heart out.

After being outed to his hockey team and then changing schools, Jock figures he’s due for something good—like the sex he missed out on in the closet. Toby, the hot grad student he meets at a frat party, seems like a great place to start, and their night together is an awesome introduction to the fine art of hooking up.

Toby’s heart takes a bruising after the near-perfect experience with Jock leads to . . . nothing. He’s been left on the outside as his friends pair up into blissful coupledom, and he’s in danger of never completing (or starting) his thesis. Can’t something go right?

Then Toby’s coerced into chaperoning a Theta Alpha Gamma trip to France. Not that he’s complaining. What better place to finish his thesis and get over that frat boy? Except Jock’s outing is leaked to the press, turning him into an unwilling gay rights martyr, and he decides France would be a great escape, too. It’s a break from reality for both guys, but they soon find their connection is as real as it gets.

As you may or may not know, Poster Boy is the fifth in the Theta Alpha Gamma series, and (at least as far as I’m able to be sure about such things) the last TAG book. No, no, don’t be sad, be happy—we’re gonna go out in style!

Let’s discuss the nitty-gritty: the Blog Tour Giveaway. The prize package this time includes: one lovely “Theta Alpha Gamma Beer Terrorist Response Team” sweatshirt (I believe I have sizes M-XXL available, choice of two styles); one paperback copy of Frat Boy and Toppy with the new cover art, signed and inscribed to the winner; a bar of soap I bought in Les Baux (was going to send olives from Sainte-Remy, but we ate them . . . sorry about that) and; of course, one penis crocheted by moi.

How does one win, you ask? By following the tour, collecting all the official “prize” words (posts will have them clearly marked), and using them as directed at the end of this post (it’s complicated).

Happy word hunting, and enjoy the tour (psssssst, this one is heavy on the cut scenes).


In case you missed all my blathering about it in various other places, we took a trip to Barcelona and Provence last spring (2013). I figured, since Poster Boy would be the last book in the Theta Alpha Gamma series, I may as well go out big, so why not have Toby and Jock fall in love during a term abroad? This was a family trip, so I can’t swear I know what it’s like to be in Provence with a bunch of brain-addled frat boys, but we did bring along both kids and my husband’s parents. I think I got pretty close to the real thing . . .

I could go on forever about Provence but I won’t torture y’all that way. Instead I’ll take you on a quick tour of important places in the book.

EuroTAG (what the guys called their frat in France) is totally made up, but I set it to the west and a little south of Saint Remy du Provence, and made up a fictional village there, too. The Calapooya campus in Saint Remy is also fabricated supposedly located south of the town center, between the monastery where Van Gogh lived for a while and the Gaulish-Roman ruin of Glanum.

My tour of actual places where scenes were set begins with Place Favier. Toby writes much of his (very overdue) thesis in a café on this square, and at one point, he finds Danny there, waiting for him. In real life, this square was just around the corner from the flat we rented, and it seemed perfect for Toby. 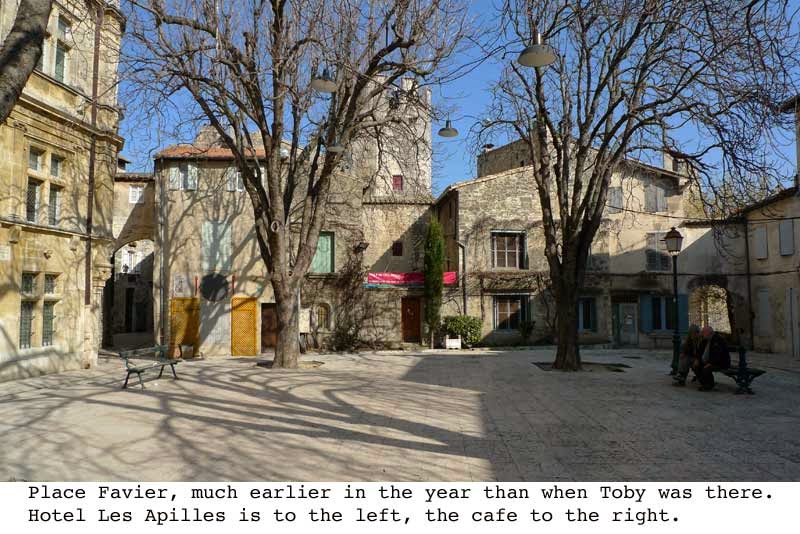 Next stop on our tour is Les Baux—a ruined medieval fortress perched right on top of a huge promontory. It’s pretty freaking amazing. The picture I’ve included is how I imagined Toby and Jock saw it when they had their picnic, and first official date. 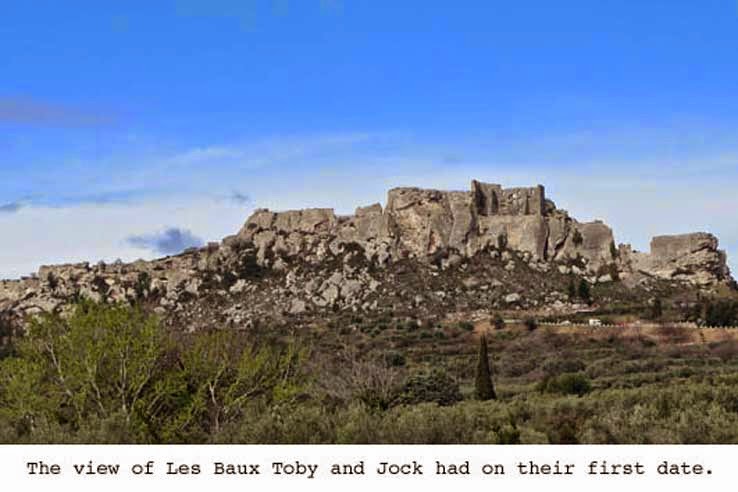 Glanum is the next “real” place the guys visit. Toby says in the book that this excavated town site is “. . . one of the finest examples of a provincial Roman city in the region” and that’s true. For anyone interested in Roman-era town planning, it’s a perfect spot to see the standard layout of a provincial city. Much smaller than Pompeii or Ostia, so easier to take in. I’ll stop with the history talk now . . . 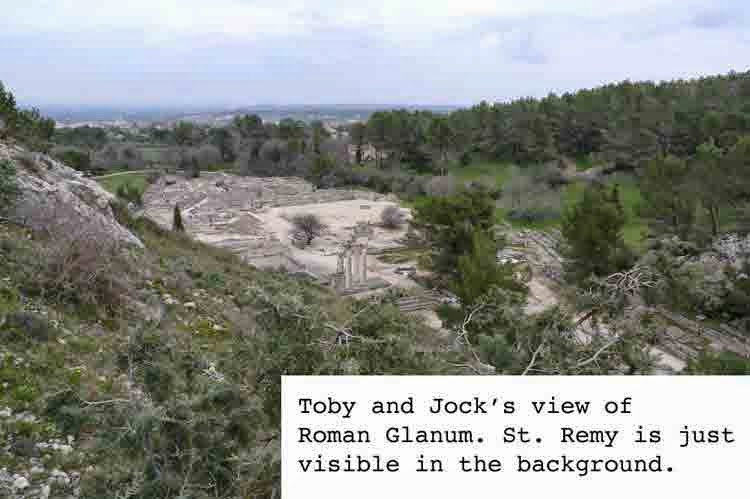 Okay, yeah, I totally lied because I’m going to talk about more history stuff. Barbegal. This place, from an engineering perspective (which, I gotta say, I don’t often see things from), is ah-ma-zing. I’ll just give you the quick and dirty—when a second aqueduct was built to supply water to the booming population in Arles, the flow from the original was sent down this steep hillside to power a grain mill with ten horizontal mill stones. They ground enough flour there to feed all of Arles, and each turbine was housed in an enclosed building. 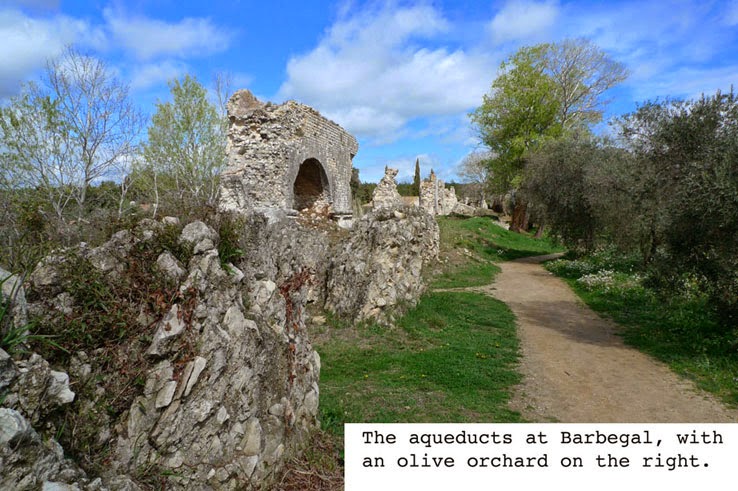 The picture I included here doesn’t show the ruins of the grain mill or the view from it, because the pic I took sucked and the ruins of the mill are really, really unspectacular, which is why almost no one bothers to come here. But I insisted, of course, just like Toby would’ve.

Just to give Toby and Jock’s (and the fratbro’s) trip here some authenticity, I wrote into the scene that they—just like us—had the window of their vehicle smashed in, and the very few things left in the car (except the numerous expensive textbooks I had on Roman and pre-Roman Gaul) stolen. I’ve included an image of our broken window for your enjoyment. 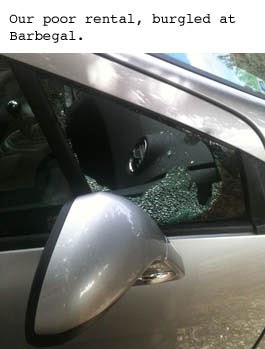 When writing Poster Boy, I spent a lot of time describing the area (so much that I had to chop out half of it), because my main intention was to give readers the feeling of what the region was like, not only a tour of some of the sites (and there are many, many more). I’m not the most well-traveled person, but I’ve been around (not like that—well, not only), and I have to say this region is one of my favorites so far. If you ever get a chance to visit, I recommend it.

For those of you playing to win the blog tour prize cache, here’s the word: ideal.

The word game—the rules are that I provide a bunch of words, and you have to create an ode to testicles. Hey, it’s fair—I gave you an ode to testicles in the book (well, part of one), you should give me one in return, using all the words from the tour. You may add any other words you need to, but it must include every word I gave out on the tour. Of course, creative cheating might receive a pass from me . . .

At the end of the tour, send your ode to me at anne @ annetenino.com and I will choose one lucky winner from all the entries I receive by paying one of my children some exorbitant amount to draw an ode out of a hat (or other handy receptacle). All masterpieces must be to me by May 4th, 2014 at midnight Pacific Daylight Time (GMT -7:00).

For a schedule of all tour stops, you can go here.

Oh, and: *If the winner will be at GRL, GayRomance Northwest or the RT Booklover’s Convention, I’m also offering a lunch with me. And yes, I’ll pay. ;-)

Raised on a steady diet of Monty Python, classical music and the visual arts, Anne Tenino was—famously—the first patient diagnosed with Compulsive Romantic Disorder. Since that day, Anne has taken on conquering the M/M world through therapeutic writing. Finding out who those guys having sex in her head are and what to do with them has been extremely liberating.

Anne's husband finds it liberating as well, although in a somewhat different way. Her two daughters are mildly confused by Anne's need to twist Ken dolls into odd positions. However, other than occasionally stealing Ken1's strap-on, they let Mom do her thing without interference.

Wondering what Anne does in her spare time? Mostly she lies on the couch, eats bonbons and shirks housework.

Check out what Anne’s up to now by visiting her various social media sites.

Thanks so much for stopping by. Until next time, happy reading!