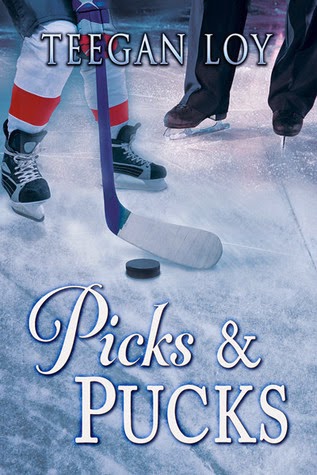 Rising men’s figure skating star, Justin Corrin, is coming home to train for the upcoming season and face his demons. The last thing Justin needs is to fall in love with a hockey player. Instead of getting rid of his demons, Justin is collecting more. He tries desperately to control his growing feelings for CJ Daly, but finds being with CJ keeps his nightmares away.

Justin isn’t the only one with problems, and hidden fears and secrets threaten to separate the two. With the pressure mounting, CJ starts to pull away, and Justin doesn’t know why. His skating suffers, and he decides to stop wasting his time on love and focus on winning the nationals.

If Justin can destroy his demons, he might have a chance for happiness on and off the ice. But if the demons win, Justin’s life could be ruined.

The premise of this book is promising: A rising figure skater falls in love with a hockey star. The figure skater, Justin, left home at 17 following the death of his mom and hasn’t fully reconciled with his family. The hockey player, CJ, departed his former college under mysterious circumstances and is now playing for Justin’s dad, who is a hockey coach at the college where Justin, now 20, is training (why Justin makes this decision when he’s loath to come home is not explained).

The book is told in the first-person, present-tense POV, making the narrative feel jarring and jumpy. Entire events (like the National Figure Skating Championships) are summarized in a paragraph. We are told, never shown.

I like figure skating, but Justin could have competed in any sport. He is so caught up in the drama in his head (letting go of his mom’s death and the resentment he feels toward his dad and older brother) that his training is barely mentioned. You’d never know he was a skating champion, except, of course, he’s the best at everything and so talented he barely has to practice.

Initially, Justin has to get over his first love, Danny, who dumped him unceremoniously rather than come out of the closet. CJ isn’t even introduced as an MC until about 30 percent into the book. The push/pull and ridiculous amounts of angst between Justin and CJ felt manufactured for pure drama. I never understood why CJ hid his past from Justin, except to be stubborn and childish.

This book isn’t focused so much on Justin and CJ as it is on Justin’s “demons,” which are presented literally: Justin sees demons under the bed. They stand in his way. He wrestles them and flips them off.

Every single character in this book is a stereotype, and the pace of the narrative is weirdly manic. People come and talk and leave and fight, and it all becomes a jumble of words. There were no believable, tangible motivations behind the characters’ actions. The forgiveness between Justin and his family comes too easily, and even Danny, Justin’s sarcastic, closeted ex, is the good guy at the end.

There were glimmers of sweetness and some sexy times between Justin and CJ. I liked Justin's skating coach, Justin's BFF Eli, and Eli's tentative coming out and his interactions with his new boyfriend. The surface editing was fine with no to few typos. But overall the book fell flat.

Buy and preorder links are provided as a courtesy and do not constitute an endorsement of or affiliation with the book, author, or publisher listed.
Posted by Dani(ela) at 4:00 PM