Today we shine the spotlight on Elise Marion's latest release 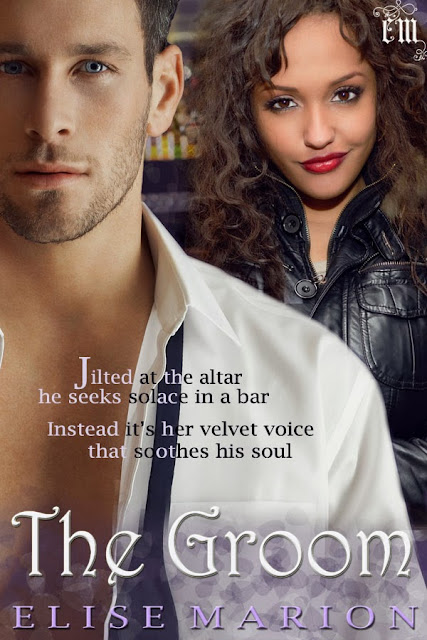 When Lyle Cummings is left standing at the altar on his wedding day, all of his carefully composed plans for the future come crashing down around him. The pragmatic doctor is left questioning his well-ordered existence and wondering if there isn't more to life than the achievements of wealth and career. When he meets Katrina Giordano, a fiery lounge singer with more passion in her pinky finger than he possesses in his entire body, his mundane life is turned upside down. In Katrina, he finds everything his life has been lacking. With her, he will learn that what he thought was love really wasn't at all. But will Katrina's dark past threaten the happiness that Lyle has found after so much heartache? With her life, and now his, hanging in the balance, Lyle will find himself tested when it comes to how far he will go for love.

Lyle Cummings glanced up from the surface of the gleaming bar top and into the eyes of the petite woman moving around behind it. She was holding a frosted beer mug in one hand and controlling the Miller Lite tap with the other. Sympathy flashed in her stare, causing Lyle to jerk his own gaze away as if stung. He didn’t want her sympathy. All he wanted was peace, and . . .

“Single malt scotch on the rocks with a twist.”

He knew that his request had come out more like a raspy, barked command but Lyle didn’t care. Today of all days, he had the right to act like a jackass. An understanding nod followed, and the bartender quickly moved to fill his order. She sat the scotch in front of him and accepted his debit card.

“Would you like me to start a tab?” she asked as she swiped his card.

Hell yes. Today was also a day for getting drunk.

He wrapped his fingers around the perspiring glass and inspected the bruised knuckles of his free hand. Mottled splotches of blue, purple, and green marred his sun-bronzed skin, and swelling edged the bruise with a ring of deep red. Lyle’s fingers curled into his palm as he downed the scotch in a few long gulps, the fire racing through his gut elevating the adrenaline rush he felt at the thought of smashing Jack Thompson’s face in. A few drops of blood stained the cuff of his white dress shirt and the sight of it sent primal satisfaction through Lyle’s gut. It was the only pleasure to be salvaged from the disaster that should have been the happiest day of his life. Well that and . . .

“Another,” he rasped, sliding the empty glass back toward the bartender.

She arched an eyebrow at him while reaching for a clean glass. “Who’s the unlucky guy?” she asked, nodding toward his bruised knuckles.

She laughed. “Looks like Nobody took quite a beating.”

That’s not all he took, Lyle thought. The reminder of the earlier events caused his rage to flash back to boiling point; Jack Thompson may have been on the business end of his fist, but ultimately the other man had won. Even now, Jack was riding off into the sunset with his Holly and probably felt not an ounce of guilt over what he’d done. And why should he? Holly was everything a man could want in a woman. Jack had lost her once to divorce. It was unlikely that he was going to be stupid enough to repeat the mistake after winning her back again.

A frown pulled at the corners of Lyle’s mouth as he stared down into the contents of his glass. The bartender reached across the wooden top and clasped his injured hand. Lyle flinched and snatched it away, glaring at her with narrowed eyes.

“I was just going to offer you some ice,” she said gently.

Lyle felt like an ass when he saw the bundle of paper towels clenched in her small fist. He tried to offer her a smile as she pressed the ice-filled towels against his knuckles, but it turned into a grimace as the ice came in contact with his flaming skin.

“You should stick around,” she said warmly after he’d taken over with the ice.

“We have live music on Saturdays.”

She placed another filled glass in front of him and Lyle took it, nodding his thanks and looking away, freeing the bartender to wait on her other customers. He took his time with this drink, the tentacles of the first two already reaching out through his body with warm intent. He hadn’t noticed much about his surroundings since arriving, but he took stock of them now as he drank.

The lighting was dim, which was good because if someone in the room knew him, Lyle didn’t want to have to deal with that. The pitying eyes of the bartender were one thing; the probing stares of people who were expecting to see him with a ring on his finger and a bride on his arm would be enough to make him want to go somewhere and splatter his brains across the wall.

The bar was long, wrapping in a serpentine pattern around half of the room. At least three other bartenders worked the gathered patrons, who sipped beer and munched on peanuts while waiting for the music to start. Conversation filled the room in a dull buzz.

The other half of the room was filled with round, cloth-covered tables and wooden chairs. Waitresses bustled in and out of the crowd in short skirts and white tops, pens in their hair and comfortable shoes on their feet. Lyle’s stomach rolled and clenched with nausea at the smell of nachos and greasy hamburgers.

He took another sip of scotch and sighed in relief at the feel of fire burning the nausea away. Just then, he didn’t care if he ever had another bite of food again in his life. If he could just crawl into the bottom of the liquor bottle and curl up in the fetal position, he could die somewhat happy . . . or, at least, numb.

Jutting out from the back wall was a stage hosting a microphone stand and a couple of speakers. A red velvet curtain separated the stage from whatever was going on backstage. Lyle tipped his glass back and stood, deciding that listening to some bartender’s sister’s band sing the blues was the last thing he wanted right now. Another drink, preferably in a quieter location, was just what he needed.

“Closing out the tab?” the bartender asked as he stood and dropped a few dollars in the tip glass. He nodded.

“Yes, thank you,” he said, holding up the makeshift ice pack. “Have a nice—”

Lyle’s sentence was cut off by a man’s voice. A burly bouncer in a tight black T- shirt was on stage, announcing the act for the night. He could barely hear him because of the catcalls and whistles coming from the audience. Every man in the room seemed to lean forward in anticipation as the curtains parted to reveal the figure of a woman holding a guitar. She walked forward with a bright smile, her skin bathed in the glow of the spotlight as she took a seat on the stool.

Lyle felt frozen in place as she strummed on her guitar and opened her mouth to sing. Her voice was like velvet, a purr that wrapped itself around him tightly and squeezed, flooding his insides with warmth and . . . something else—he wasn’t quite sure what. He felt himself moving, and somewhere in the back of his mind realized that he’d backed toward the stool he’d left seconds ago and was sitting down again.


About Lyle Cummings, the jilted groom:

I’ve said it before, and I’ll say it again: the hero is my favorite part of any Romantic story. While I enjoy reading and writing about a strong woman as a heroine, I always find myself so invested in the journey of a hero. Each one is unique, each one has a history, and each one has a journey to complete by the end of the story.

I think that is why I so enjoyed writing The Groom. While, at its core, the story is definitely a romance, I like to think of it as being more than that. Aside from being a love story, The Groom is also the story of a man losing himself, only to find that he was lost all along. Lyle is a man with a ten-year plan. He is focused and he is dependable. He’s worked hard most of his life to become successful, and decides to settle down with the woman he loves more because it’s time, and less because it is his chosen bride is the right woman. Being left at the altar will change everything for him, and here comes the fun part. Lyle will discover that everything he ever wanted means nothing to him now, and what the kinds of behaviors and emotions he would have once thought of as frivolous, now rule his life.

I thoroughly enjoyed writing about Lyle and his unraveling. Because I always believe that how we rise to the occasion when things don’t go our way, is a true testament to who we are as people. It strengthens us and, in many cases, brings out the best in us. In the case of Lyle Cummings, turning his life upside down and watching him evolve into a different person filled me with love for a fictional character. He’s the kind of guy you never see coming; the one who doesn’t immediately come off as dashing, romantic, or passionate. But then, something surprising happens. The layers start to peel back and you find yourself pleasantly taken by surprise.

Purchase from Bottom Drawer Publications or

Elise Marion is a lover of books and has a special place in her heart for sweet and sensual romance. Writing about love across all walks of life is her passion, as is reaching people through the written word. The Army wife and stay-at-home mother of three spends most of her time taking care of her children. Her second job includes writing stories about characters that people can fall in love with. When the Texas native isn’t caring for her family or writing, you can usually find her with her nose in a book, singing loudly, or cooking up something new in the kitchen.

​ Welcome to Bottom Drawer Publications. Our motto above says it all. Publishing both e-books plus print-on-demand for our novel-length books means that if you feel like something to read at any time of the day or night, you can download a reasonably-priced, quality book within minutes from your choice of booksellers, including our own digital shop. If you prefer to hold a paperback in your hands, our print-on-demand printer has presses in the US, UK, Europe and Australia, meaning shorter delivery times and lower postage costs to you.

​ We are an inclusive publisher, believing love is love, which is why you won't see a separate LGBT genre—we publish hetero and gay fiction in all of our romance sub-genres:


Promotional post. All materials provided by the publisher.
Posted by Sandra at 12:00 AM